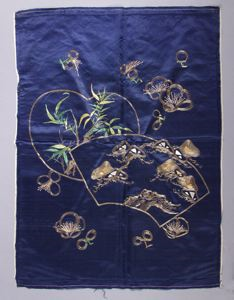 Medium
Navy blue silk satin, embroidered with metal and silk threads.
Object Description
Rectangular piece of navy blue silk with couched gold-wrapped threads outlining the shapes of two overlapping fans, with the opened folding fan lying over the fixed fan. Bamboo depicted in gold couching and green/yellow silk satin stitching lies within the boundaries of the fixed fan. Gold couched pine boughs lie within the opened folding fan. Couched plum blossoms and buds with stem stitched stamens are scattered around the outside of the fansâ borders. Together, the bamboo, pine, and plum blossoms stand for the âThree Friends of Winter,â and represent resilience, steadfastness, and perseverance. The pronunciation of âbambooâ in Japanese (take) is homophonous with the Chinese characters used in âwarriorâ and âbravery,â and also sounds similar to âtallâ (takai) and âhawkâ (taka). Pine trees represent long life and good fortune; its pronunciation (matsu) is homophonous with âwait,â and when combined with the pronunciation of the plum (ume) which is homophonous with âbirth,â the pine and plum blossoms convey auspicious wishes for children. This may mean that this fukusa was used as part of a wedding gift, but the âThree Friends of Winterâ motif is common in Japanese art and does not always indicate a wedding. The opened folding fan is an auspicious omen for âunfoldingâ the future.

Fukusa are used in Japanese gift-giving rituals, where the gift items are placed in box which sits on a tray, and the tray is covered by the fukusa. After receiving the gift, the recipient admires the box, tray, and fukusa, and then returns all three to the gift giver. Taking into account the late date of this fukusa, and that itâs missing the back lining that would typically include a family crest (mon), and also lacks the tassels usually found at the corners of fukusa, it is possible that this particular textile was either made for export or belonged to a family who sold it. It is also possible that a Japanese family made a gift to a Westerner, and being ignorant of Japanese customs, the Westerner kept the fukusa, which then found its way into Scrippsâ collection.


Keywords Click a term to view the records with the same keyword
This object has the following keywords:
Flowers, Textiles*, Wrappers
Additional Images Click an image to view a larger version

Your current search criteria is: Keyword is "ZV".