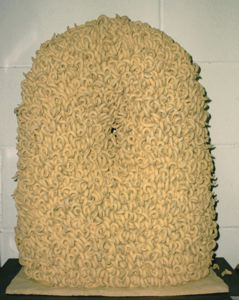 Marks
None on piece.
Medium
Cast and hand-formed earthenware sculpture on stained wood base; unglazed. Stoneware with small curls of twisted, intertwined clay, shaped in a rounded stele form and named for an ancient city. Formed in natural unglazed clay (buff) fired to Cone 10 in heavy reduction; hollow and unbuttressed. Base coiled on a flat clay slab. Coils are hand-rolled.
Object Description
A grouping of separate earthenware curls in a fired cyllindrical shape. Rosenthal turned to visual art in 1967, studying ceramics with the well-known California ceramist John Mason. Â She continued in ceramics until 1975, when she returned again to theatre and performance. Â "Rosenthal consciously pushed the limits of associations with both nature and ancient history and myth. Â In 1974, she described her pieces as 'evocative of hair or colonies of parasites,' and said that her pieces, based on natural and early architectural forms such as beehive and rounded stele, were named after ancient cities of the Amazons: Mytilene, Amastris, Salmanoe, and Clete." Â Moira Roth, "Rachel Rosenthal," Baltimore and London: The Johns Hopkins University Press, 1997.
Keywords Click a term to view the records with the same keyword
This object has the following keywords:
Biomorphic Abstraction, Earthenware
Portfolio List Click a portfolio name to view all the objects in that portfolio
This object is a member of the following portfolios:

Your current search criteria is: Keyword is "UB".