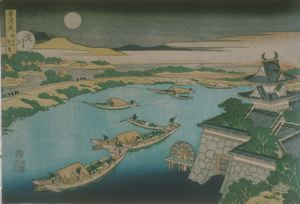 Commentary
This print depicting the Yodogawa River between Kyoto and Osaka is one of a series of three prints that Hokusai designed in 1833 with the title Setsugekka, or Snow, Moon and Flowers. This title was an expression and theme that originated in a Tang dynasty (618-907) Chinese poem. It became popular in Japanese art and design in the late Edo period in reference to beautiful natural scenery, as well as to the most scenic seasons of the year â winter, autumn and spring. The other two prints in this series are Cherry Blossoms at Yoshino and Snowscape by the Sumida River in Edo. In this peaceful image shown from a birdâs eye view, the full moon illuminates boats approaching Osaka Castle, a structure that played a key role in the unification of the country in the late 16th century.


Marks
Signed zen Hokusai Iitsu hitsu. Kiwame censer's seal and an additional seal (date seal?).
Medium
Colored ink on paper; woodblock print; oban yoko-e.
Object Description
Late 18th to mid-19th century Japanese color woodblock print depicting the moon over the Yodo river.
Publisher
Eijudo.
Keywords Click a term to view the records with the same keyword
This object has the following keywords:
1801-1820, Lakes and Rivers
Portfolio List Click a portfolio name to view all the objects in that portfolio
This object is a member of the following portfolios:

Your current search criteria is: Keyword is "TK".