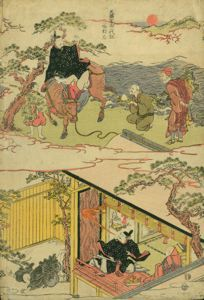 Commentary
This image is from a printed book chronicling the history of the Kitano Shrine in Kyoto and the evolution of Michizane from human to angry spirit (Japanese: onryÅ) to a kami called Tenjin. Here, he is shown wearing the black robes of an imperial courtier and riding a bull. According to legend, during Michizane's funeral procession, the bull pulling the cart bearing his remains stopped at a certain spot and refused to go any further. The spot was therefore chosen as the site of his shrine, and the bull became regarded as the messenger of the kami Tenjin. Statues of the bull are often found on the grounds of shrines dedicated to Tenjin. Â

Marks
Unsigned. Kiwame censer's seal, publisher's seal.
Medium
Colored ink on paper; woodblock print; oban tat-e.
Object Description
Late 18th century or early 19th century Japanese color woodblock print. The print is divided in half into two scenes, the upper scene of a traveler on a bull, the lower scene of figures (probably of a historical subject). Possibly one sheet from a triptych.

This woodblock print records one of three paintings that were used to teach about the history of Kitano Temmangu, the Shinto shrine erected in Kyoto in 947 to honor Sugawara Michizane as the god Tenjin. The upper image shows an elderly couple making offerings to Tenjin. Below he is shown with a Buddhist priest, probably Doken to whom he showed his powers as the god of fire and thunder (Karai Tenjin). The illustration technique found here is typical of a premodern Japanese painting (yamato-e) style and differs significantly from the more "Western" influenced modern works by Chikanobu and Yoshitoshi.
Publisher
Eijudo (c. 1730's-1840's).
Keywords Click a term to view the records with the same keyword
This object has the following keywords:
1701-1800, Buddhism
Portfolio List Click a portfolio name to view all the objects in that portfolio
This object is a member of the following portfolios:

Your current search criteria is: Keyword is "TJ".