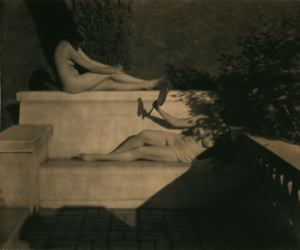 Commentary
The artistic pairing of Margrethe Mather and Edward Weston was a true collaboration. Although Weston destroyed his diaries from the years of their eight-year romantic relationship, records suggest that the two developed a shared artistic vision. 1

This print of dancers from the troupe of California choreographer Marion Morgan is one of about a dozen that Mather and Weston co-produced in 1921. The photograph contains experiments with shadow and an overt sensuality that is indicative of both Matherâs and Westonâs work at the time. The pictorialist elements of the photo â its graininess and use of the platinum print, which produces fine gradations of tones â are clear. However, the photograph also indicates the more modernist direction that both photographers were pursing in their work, including the emphasis on formal elements, such as the shape produced by the human body, and the photographâs spare, uncluttered composition.

Although Weston and Matherâs romantic involvement had ended by 1921, when Weston began his affair with Tina Modotti, their artistic collaboration continued. 2 An intimate portrait of the two by Imogen Cunningham, taken in 1922, speaks to their continued emotional closeness.


Object Description
Two women on stone bench; one figure sitting with legs extended, other figure reclining and holding a large leaf. Artist's initials in pencil, verso. On original mount, dated and signed in pencil in lower right corner. Silhouette of portrait of a man on back of mount.
Keywords Click a term to view the records with the same keyword
This object has the following keywords:
Dancers, Nudes, Photography
Portfolio List Click a portfolio name to view all the objects in that portfolio
This object is a member of the following portfolios: