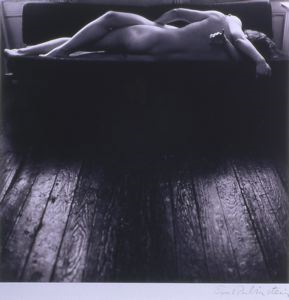 Essay on the work:

Eva Rubinstein was born in Buenos Aires, Argentina and spent much of her childhood in Paris. She traveled extensively on concert tours with her father, Arthur Rubinstein, before immigrating to the United States with her family after World War II. In other words, Rubinstein knows cities. Yet, the cityscape normally associated with buzzing metropolises is absent in her photograph entitled, New York. Instead, Rubinstein turns her lens to the interior space of the city: framing a still and quiet room. Identical to many photographs within Rubinsteinâs body of work, this photograph creates a mysterious narrative, veiling the composition in ambiguity, longing and light. Here, two nude figures cling to one another. Sunlight outlines the womanâs silhouette, making her glow. Her hand reaches out and grasps the edge of the narrow couch, securing and strengthening her hold on the man. New York Cityâs harshness and fast pace could not be further away from this room where time is suspended and street noise muffled. Instead, the linear planks of wood and the shapes of the two nude figures entwined on the couch take on the architecture of the New York skyline. Without the distractions of the cityâno honking cars, pedestrians, or grimeâthe nude figures are the only focus and subjects of the composition. Mystery, a constant in Rubinsteinâs oeuvre, presents itself: the subjectsâ relationship remains uncertain. The viewer longs to ask questions. Is this their final embrace or are the figures joyously reuniting? Do we linger at this photograph because we too, yearn for a fulfilling and strong hold on one another rather than or in spite of the buzz and clutter of everyday life? Does this romantic embrace reveal what we fundamentally want: a simple room with someone to love? The viewer is left to decide on the answers. Like a fond memory recalled at will, the details of the photograph remain out of focus, ready to be interpreted. Donielle Kaufman â10 Wilson Intern 2009-2011


Marks
Signed in pencil on the inner mat, to the lower right of the photograph.
Medium
Vintage silver gelatin print.
Object Description
Black and white photograph of two horizontal nudes, intertwined on a couch.
Keywords Click a term to view the records with the same keyword
This object has the following keywords:
Gelatin silver print, Nudes
Portfolio List Click a portfolio name to view all the objects in that portfolio
This object is a member of the following portfolios:

Your current search criteria is: Keyword is "OE" and [Objects]Object Type is "Photography".