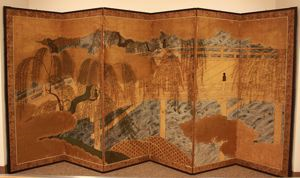 Marks
Unsigned, Kano studios style.
Medium
Blue, green, black and brown paint, with gold leaf, on paper. Brocade double border and lacquered wood frame.
Object Description
Six panel screen of a bridge over water, in cool tones and gold leaf.
The fast currents of the Uji River southeast of Kyoto were treacherous to travelers, but proved popular with poets who compared its dangers to the difficulties of love. The first bridge was built in 646, and several chapters of the 11th century novel, Tale of Genji take place there. Kaoru and Niou, Genji's son and grandson, pursued the Uji Princesses and their sister Ukifune, with disasterous results. It was also the site of several battles in the 12-13th centuries, and The Tale of the Heike records how Minamoto Yorimasa (1106-1180) was struck by an arrow while protecting Prince Mochihito and decided to commit suicide instead of surrendering to the opposing Taira forces.
From the 16th century, artists of the Kano studios often depicted the arched bridge andwillow trees to remind viewers of the many complex love affairs and suicides associated with the site.


Keywords Click a term to view the records with the same keyword
This object has the following keywords:
Bridges, Lakes and Rivers, Screens and Scrolls
Portfolio List Click a portfolio name to view all the objects in that portfolio
This object is a member of the following portfolios:

Your current search criteria is: Keyword is "LH" and [Objects]Object Type is "Screen".