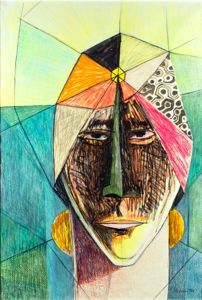 Commentary
In interviews, Samella Lewis has spoken about the influence the religion of her familyâthe Yoruba religionâhad on her (âImage and Beliefâ 59-60). She turned to those beliefs when tragedy struck: her mother was murdered. Lewis gave herself a year away from work to move through the initial waves of grief. As always, creating art brought her solace and strengthened her, giving her a means of expression beyond words. During that year, she created a piece she named Obeah Woman. It is a portrait of her Aunt Laura. As is so often the case in her work, Lewis creates a composition in which the figure dominates. Here, we see only the neck and head of a woman. The eyes are made human by the addition of irises and whites; the face is modeled (the edge of the jaw, the shadows of the cheeks and under the lower lip), giving it three dimensionality. We have before us a human being, but there is something else afoot here. The third eye, set like a faceted golden jewel well above the eyebrows, shines forth in a hexagon, at the center of her forehead, marking the highest point where the cloth covering her hair is folded back from her face. Yellow lights play over her upper lip and chin, signifying the light emanating from the third eye. Beyond the head of the woman, the light seems to continue, radiating outward in geometric patterns, delineated with powerful diagonal lines.

We, as viewers, know that what we are seeing is not a part of everyday physical reality. Instead, we are witness to an unseen power. The eyes gaze upward, in the manner of paintings of Catholic saints and martyrs. There is a black triangle on the left side of the womanâs head, and a greenish-gold triangle on the right. They seem to be balanced by a black triangle making up the right side of the womanâs nose, and a green triangle making up the left. If we considered these shapes as symbols of the binary thinking that is so much a part of the Yoruba way of looking at the cosmos, we might speculate that these are the forces of death versus life. The red triangle that runs along the right side of the face, coupled with the white triangle just above it, might be a reminder of Shango, whose colors are red and white (Teish 114). The colors may also connote the passing of her mother. It is particularly poignant to consider that Lewisâs mother was killed while making her way to church. She was 92 years old. The steadfastness given off by the figure in House of Shango (see 2015.2.18) reverberates here as well. In Obeah Woman, Lewis has portrayed a woman of great resolve, one aware that there is far more to the world than the material.

Reminiscing about a conversation sheâd had with her Aunt Laura, probably when Lewis was in college, she related that her aunt was a bit upset with Lewis because she had confessed that she didnât believe in hoodoo. In reply, Laura simply said, âYou will one day, you willâ (âImage and Beliefâ 13). Lewisâs portrayal amply depicts the strength Aunt Laura derived from her beliefs. It may testify to Lewisâs commitment to those beliefs as well.


Marks
Lower right: artist's signature and year
Medium
colored pencil on paper
Keywords Click a term to view the records with the same keyword
This object has the following keywords:
Alchemy and Mysticism, Drawings and Pastels, Females
Portfolio List Click a portfolio name to view all the objects in that portfolio
This object is a member of the following portfolios:

Your current search criteria is: Keyword is "LA".