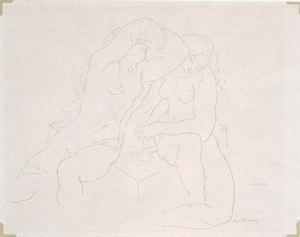 Commentary
Paper imprinted "Noiram Bond"; taped corners of paper.
Medium
Pencil (graphite) on tissue paper.
Object Description
Lorser Feitelson was a key figure in modernism in California at a time when there was limited exposure to the avant-garde styles then popular in Europe and the East Coast. He and his wife, artist Helen Lundeberg, formulated a style called Post-Surrealism, which borrowed imagery from Surrealism but rejected its lack of conscious process.

Feitelson was born in Savannah, Georgia but grew up in New York City. His father was an art connoisseur, who took his son on frequent visits to the Metropolitan Museum of Art. After seeing the 1913 Armory Show in New York, which introduced him to new concepts in modern art, Feitelson turned to abstraction. After traveling between New York and Paris, in 1927 Feitelson moved to Los Angeles and became a leader of the artistic avant-garde in Southern California.


Keywords Click a term to view the records with the same keyword
This object has the following keywords:
Drawings and Pastels, Females, Modern 20th century, Nudes
Portfolio List Click a portfolio name to view all the objects in that portfolio
This object is a member of the following portfolios:

Your current search criteria is: Keyword is "LA" and [Objects]Country is "USA".