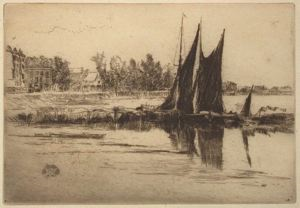 Commentary
James McNeill Whistler was an American-born, British-based artist who became one of the most influential American painters and etchers of the late 19th century. He has even been credited as the first American modernist to influence European art. An exceptionally gifted engraver, Whistler produced over 490 etchings in his lifetime.

This etching and drypoint, Hurlingham, was created in January 1879. It was sold as a means of fighting off debt. Unlike the tempestuous waters of the Moran etchings, this work depicts a much calmer scene of the Thames in London. We can admire the precise, expressive lines that Whistler has used to depict a group of rowing boats or skiffs moored along a jetty. Whistler was often seen walking the streets of London with an etching plate. Like the impressionists, he preferred to work on site instead of in his studio, to better capture the atmosphere of the scene. In the bottom left hand corner, we find his trademark butterfly signature, based on the âWâ of his name.

In 1877, James Whistler sued British art critic John Ruskin (1819â1890) for libel after the critic insulted his painting style, comparing it to âflinging a pot of paint in the publicâs face.â Losing the case and sinking into massive debt, Whistler sold off much of his work and turned to prints in hopes of making money. The Hurlingham Club on the Thames River had a wealthy clienteleâthey invented the game of polo. Whistler aimed to court these gentlemen and their funds by depicting one of their favorite pastimes: sailing along their riverfront property.

Your current search criteria is: Keyword is "KU".