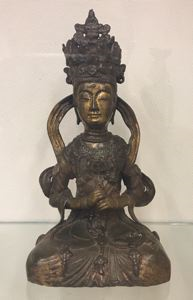 Commentary
One of the most important, beloved, and complex deities in Buddhism is the infinitely compassionate AvalokiteÅvara (Chinese: Guanyin), whose name translates to âThe Lord who looks down [compassionately at the suffering beings].â AvalokiteÅvara is regarded in all MahÄyÄna and VajrayÄna traditions to be a âbodhisattva,â an enlightened being who has taken a vow to work tirelessly over countless lifetimes to guide other living beings to nirvÄá¹a. To indicate their distinguished status, bodhisattvas are portrayed adorned with lavish jewelry, crowns, and elegant robes. AvalokiteÅvara is recognizable by the seated AmitÄhba Buddha image in his crownâa nod to his affiliation with AmitÄhba, the celestial Buddha of the Western Pure Land.

AvalokiteÅvara was originally regarded as a male bodhisattva. In Ancient India, however, bodhisattvas were represented as princes, who were typically imagined as effeminate (i.e. slender, refined, and lacking muscle) due to their luxurious and relaxed lifestyles. It follows, then, that the gender identity of representations of AvalokiteÅvara often appears to be ambiguous, as is the case in this 19th century sculpture. His apparent gender fluidity is reaffirmed by Chapter Twenty-Five of the Lotus SÅ«tra, a scripture which explains that AvalokiteÅvara can adopt up to thirty-three different guisesâincluding those of a nun, a wife, and a girlâin order to assist living beings in their spiritual cultivation.


Marks
No noticeable marks
Keywords Click a term to view the records with the same keyword
This object has the following keywords:
Buddhism, Chinese Art, Metalwork, Religious Objects

Your current search criteria is: Keyword is "II".