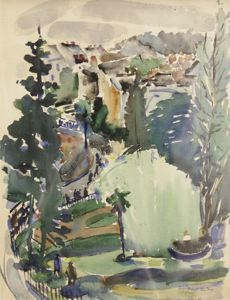 Commentary
Phil Dike was born in Redlands, CA. and studied at Chouinard Art Institute (Los Angeles), Art Students League (New York), and the American Academy (France). He was a member of the National Academy of Design, American Watercolor Society, California Water Color Society, and the Philadelphia Water Color Club. In 1923, he was awarded a scholarship to study at the Chouinard Art Institute and received instruction from F. Tolles Chamberlin and Clarence Hinkle. He continued his art education in New York City studying with George Bridgman, Frank Vincent DuMond and George Luks. After returning to California in 1929, he began teaching at the Chouinard Art Institute and was one of the first artists to develop what became known as the California Style of watercolor painting.
In the early 1930s, he continued teaching and painting and took further studies in Paris. His watercolors were being exhibited in museum shows throughout America and he was receiving wide acclaim and numerous awards. By 1935, he was also working at the Walt Disney Studios where he taught art and color theory while working on animated films.
After World War II, Dike left Disney and went back into teaching and painting full time. He and Rex Brandt formed the highly successful Brandt-Dike Summer School of Painting and during regular school months, he taught at the Chouinard Art Institute.
Through the 1950s and 1960s, he was a professor of art at Scripps College and Claremont Graduate School.

Vive La France comes from Philip Dikeâs time studying in France early in his careerâmost of his work depicts the greater LA area, where he lived both prior to and after his travels in Europe, and which he selected over New York, the center of the 1930s art world. Dikeâs perspectives are often playful, flattening and elongating forms for effect. Here, the winding pathway through the park seems oddly steep, and the park itself appears turned up towards the audienceâs eye, eschewing a more naturalistic perspective. In addition to teaching at Scripps College from 1950 to 1971, he worked on animated films for Walt Disney Studios, contributing art to Snow White and the Seven Dwarfs, as well as Fantasia.

On the back of the work was written, "Viva France." Whether this was written by the artist or another, is unknown.
Medium
watercolor and pencil on paper
Keywords Click a term to view the records with the same keyword
This object has the following keywords:
Landscapes, Nature, Western Paintings, Western Works on Paper

Your current search criteria is: Keyword is "IE".