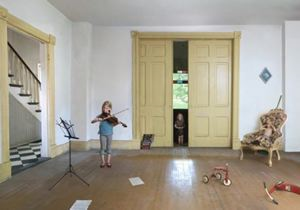 Commentary
Julie Blackmon is a photographer, based in Missouri, whose work is inspired by her experience growing up with eight siblings. Her staged images of children at play have become popular among collectors, including Reese Witherspoon. This image, "Concert," taken in 2010, captures her humorous signature style, whose Vermeer-like portrayal also betrays lurking chaos. Her use of family models calls to mind the tableau staging of children in the works of British photographer Julia Margaret Cameron, well represented in the collection, except here, through Blackmonâs use of digital techniques, we see it in vivid color. Although the Gallery has many photographic depictions of children in the works of Marion Post Wolcott and Helen Levitt, we have no contemporary examples; Blackmonâs work will be an important addition as we expand our 19th and 20th century collection into the 21st.

Though the subject matter of suburban childhood seems mundane, Blackmonâs dynamic compositions make the everyday somewhat strange. In Concert, part of the Homegrown series, a tricycle, scooter, and violin draw a line diagonally through the picture, where the three children, each one framed, create a dynamic triangle at the center of the print. The photograph, like other works in Homegrown, is subtly surreal: the house looks too clean for children, and the walls are eerily empty. Many of Blackmonâs images have an artificial and staged quality, and it is often unclear whether the scene is an unnerving portrait of family life or something like a strange, dry joke. The title highlights this tension between the surreal and the satirical: on one hand, itâs a concert for nobody, set in a barren house. On the other hand, it highlights the chaos of personalities that often accompany raising a child.


Marks
Marks (in black pen) are as follows:
Concert, '10
#6/25, Julia Blackmon
Medium
digital photo on paper
Keywords Click a term to view the records with the same keyword
This object has the following keywords:
Children, Domestic Scenes
Portfolio List Click a portfolio name to view all the objects in that portfolio
This object is a member of the following portfolios:

Your current search criteria is: Keyword is "EX".