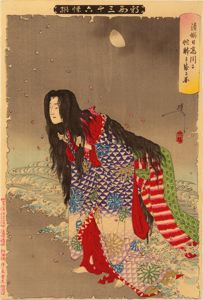 Commentary
This print depicts Kiyohime, a young woman whose rage transformed her into a terrifying serpent; a legend so popular that it was the subject of both Noh and Kabuki plays. In the legend, Kiyohime fell in love with the Buddhist monk Anchin and declared her love for him, but he told her that as a monk he could not return her love. When she refused to give up, he fled to his monastery. Furious at his rejection, she began pursuing him, her anger intensifying along the way. When she reached the Hidaka River, she began transforming into a serpent and swam across the river towards the monastery. Anchin learned of her approach and attempted to hide from her inside a large bronze bell, but she coiled around it and burned him alive, killing herself too. Here, Kiyohime is shown emerging from the river, her body distorted by her transformation, the triangle pattern on her kimono suggesting snake scales, and her face taught with pain and anger.

In the late 1860s, Yoshitoshi reached a point of considerable popularity for his violent and gory prints. However, at the beginning of the 1870s, Yoshitoshi had his first encounter with mental illness, which continued to reappear throughout his life. Yoshitoshi fell into deep depression, unable to function properly and brought to severe poverty. By 1873, his depression began to fade and he found himself functional enough to work regularly. From then on, he signed his prints with Taiso, meaning âgreat resurrection.â Most likely catapulted from his rise from depression, Yoshitoshi soon after discovered his own signature style. Unlike most Japanese artists before him, Yoshitoshi seems to have been able to express inner emotion because of his emotional involvement with his human subjects.

Despite fighting his final battle with mental illness at the same time, Yoshitoshi finished and published the series Thirty Six Ghost Stories. Like the majority of many other prints from the series, âKiyohime Changing into a Serpent at the Hidaka Riverâ does not depict a ghost, but rather, a person, contrasting his previous series One Hundred Ghost Tales. Recorded by the 15th century emperor Go-Komatsu, the story of Kiyohime and Anchin inspired the noh play Dojo-ji and its 1753 kabuki adaptation, Masume Dojo-ji, or The Maiden of Dojo Temple. In the story, Kiyohime, the daughter of an innkeeper, grows particularly attached to Anchin, a handsome and pious monk of the Dojo temple who stays at her fatherâs inn during his yearly pilgrimage to Kumano Shrine.

Unfortunately for Kiyohime, Anchin explains that as a monk, he cannot reciprocate her feelings when she confesses her love to him. Due to her insistence, Anchin flees to Hidaka River and she pursues him several days later. Faced with the obstacle of the river in her pursuit, Kiyohimeâs wild emotions transform her into a snake creature to cross it, which Yoshitoshiâs print depicts.

Yoshitoshiâs âKiyohime Changing into a Serpent at the Hidaka Riverâ portrays Kiyohime emerging from the river, determinately wringing out water in her hair and biting her lower lip with subtle eroticism. Suggested by her hunched body, she has been partially transformed. Further highlighted by the harsh chemical red, green, and purple dyes exported to Japan at the time, her scaly kimono pattern intensifies her transformation. The falling cherry blossom petals further accent the dramatic diagonal that Kiyohimeâs body creates and its symbolism of ephemerality reflects the transformational aspect of Kiyohimeâs story.

In terms of composition and subject matter, this print almost reproduces the print of the same scene that he designed for his series, One Hundred Ghost Tales. However, Yoshitoshiâs later print shows his maturity as an artist. As noted above, after taking on the name Taiso in his signatures, Yoshitoshi developed an understanding of the human psyche in his art. Over the duration of his career, he transitioned from traditional vegetable pigments to harsher Western pigments for the purpose of expression and experimentation. With realism in her clothing and body, he appears aware of the mind within his subject in this subtle depiction. Notably, he portrays Kiyohime as a person rather than as stereotyped bijin, which characterizes his other portrayals of women.

Kiyohime was the daughter of an innkeeper at the village of Masago. Â Anchin was a devout monk at Dojo Temple on the banks of the Hidaka river. Â Each year Anchin stayed at Kiyohime's father's inn during his annual pilgrimage to Kumano Shrine. Â Each year the little girl to whom Anchin had been kind and given small presents grew older.

One year (928), she suddenly declared a passionate love for him. Â Appalled, he explained that as a monk he could not possibly return her love. Â She insisted; he fled to his monastery. Â A few days later she set off in pursuit but was halted by the Hidaka river, which was in a flood. Â In the throes of her uncontrollable emotions, Kiyohime began to change into a serpent and swam over to the other side. Â Anchin tried to hide under the bronze temple bell, ten feet high and weighing many tons. Â Kiyohime, now completely transformed, found him and coiled herself around the bell. Â So intense was the heat of her fury that the huge bell melted, killing them both.

The fifteenth-century emperor Go-Komatsu had this story recorded on scrolls, which are still preserved at the temple. Â The story forms the basis of the Noh play Dojo-ji, from which the Kabuki play Masume Dojo-ji, or The Maiden of Dojo Temple, was adapted in 1753. Â This includes a famous and still-popular dance in which Kiyohime's serpent-spirit attempts to damage a newly dedicated bell at the temple.

In the print a partially transformed Kiyohime emerges dripping from the river. Â She wrings the water out of her hair, gripping it in a gesture of determination. Â Her back is bowed, and the patterns of her kimono suggest a serpent's scales. Â The falling cherry blossoms denote spring (the time of Anchin's pilgrimage) besides, as we have seen in the print of Sakurahime (5), the fragility of life.

This is an almost exact reproduction of a design that Yoshitoshi drew at the beginning of his career for the series One Hundred Ghost Stories of Japan and China, dating from 1865. Â It is significant that both his first and last major series were devoted to supernatural themes. Â There was always a good deal of borrowing of design ideas and subject matter among print artists in Japan, and it was not unusual for an artist to draw on his own earlier work. Â In this later design, Kiyohime's robes are more scaly, the figure more bent, and a moon obscured by stormy black clouds has been introduced - but the warped passion of the young girl remains.

Stevenson, John. Â Thirty-Six Ghosts. Â Hong Kong: Â Blue Tiger Books, 1992.
Publisher
Sasaki Toyokichi.
Keywords Click a term to view the records with the same keyword
This object has the following keywords:
1886-1890, Mythological Humans, Yokai
Portfolio List Click a portfolio name to view all the objects in that portfolio
This object is a member of the following portfolios: