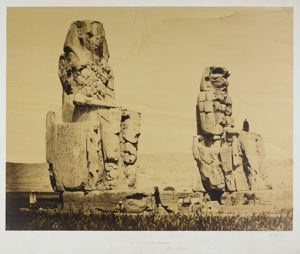 Commentary
Frith took these images of the Colossi of Memnon, also known as el-Colossat or el-Salamat, during his first excursion down the Nile River in 1857. The two statues of Pharaoh Amenhotep III have stood in the Theban necropolis across from the temple of Luxor, seen in the background, since 1350 B.C.E. (1). Just as the Ancient Egyptians carried quartzite sandstone upstream to craft the sixty-feet tall statues, Frith traveled on a small sailboat laden with a half ton of photographic equipment to capture this image. In the 1850s, the collodion process, or glass plate technique, began to replace paper photography and its grainier images. Frith preferred the wet collodion technique for its shortened exposure, which requires preparing a slide directly before exposure, but this proved difficult with collodion fizzling and boiling over glass plates in the desert heat (2).

Despite the technical obstacles of early travel photography, Frith was one of the first photographers to express concern about the âdifficulty of getting a view satisfactorily from the cameraâ (3) in order to achieve desired perspective as a landscape painter might. In The Statues on the Plain of Thebes, reeds in the foreground form a strong horizontal that contrasts with the receding perspective of the colossi. Human subjects are rare in Frithâs landscapes, as he sought to convey antiquities to the British public devoid of contemporary life; most likely, the local guides and donkey that rest at the feet of the pharaohs enthroned fifty feet apart were shown here to convey their stately scale.


Object Description
"Lateral view of the colossal statues on the plain of Thebes. Various figures on and around them. Printed credit, Date & title on the mount."
Keywords Click a term to view the records with the same keyword
This object has the following keywords:
Albumen print, Desert
Portfolio List Click a portfolio name to view all the objects in that portfolio
This object is a member of the following portfolios: