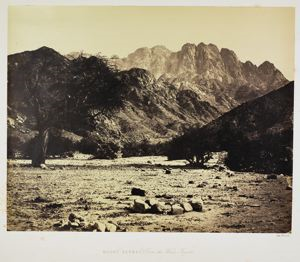 Commentary
Francis Frith's photographic focus on the lands loosely known as the Holy Land was both a canny commercial move and a deeply felt project to authenticate Scripture through the unparalleled veracity of photography. His first photographic expedition to the region in 1856 launched his career as one of the most highly regarded travel photographers of his time, and ultimately one of the most influential publishers of travel photographs. He photographed in different formats--mammoth plate, standard size, and stereo photographs--offered in both deluxe and inexpensive publications; thus assuring enormous market penetration. His photographic publications were positioned as an integral part of an active public conversation around the conflicting claims of contemporary science and "an unwavering faith" in the truth of the Bible. As the dedication in the Queen's Bible read, "Art aspires to serve as the handmaid of Revelation." It is likely that Frith made the negative for this print in the spring of 1860 on his third and final trip to the region during which he set out across the Sinai Peninsula to follow the assumed route of the Israelites as they escaped Egypt. The view up the dry desert riverbed frames Mount Serbal, one of two mountains contending for identification as the mountaintop on which Moses received the Ten Commandments. The view was first published in the Holy Bible, Containing Old and New Testaments, Illustrated with Photographic Views of Biblical Scenery from Nature by Frith (London, 1862), known colloquially as The Queen's Bible because of the lavish production values and dedication to Queen Victoria. Later that year, it was included in Egypt, Sinai, and Palestine, Supplementary Volume, and then published in various collections over the next several years. Frith varied the photographs and the sequence in which they were presented in the many publications produced over his long career; his intent was not to publish a chronology of his travels but rather to create photographically the experience of travel. Kathleen Stewart HoweÂ  Sarah Rempel and Herbert S. Rempel â23 Director
Pomona College Museum of Art
Howe, Kathleen. Revealing the Holy Land: the Photographic Exploration of Palestine. (Berkeley: University of California Press, 1997).
Nickel, Douglas R. Francis Frith in Egypt and Palestine. (Princeton: Princeton University Press, 2004).

Frith took this panaroma of the Wadee Feyran (Wadi Feiran), the Sinai Peninsulaâs largest wadi, or valley, in 1858 during the second of his three voyages to the region. At the time, there were no roads in Palestine, so he made a forty-day trek from Egypt across the deserts of the Sanai, continuing on to Jerusalem, Palestine, and Syria, carting a ton of photographic equipment by camel (1). Frith traveled to the region inspired in part by his Quaker faith and his interest in biblical historicism; he considered photography to be particularly well equipped to quench British geo-piety, or the study of Old and New Testament stories through their geographical setting (2), which was popular at the time. Wadi Feiran is the site where Moses struck a rock with his staff to bring forth a spring from which the Hebrews could drink; Mount Serbal is the mountain from which Moses watched his people battle and defeat the Amalekites.

This wet collodion process print, devoid of manifestations of contemporary life, provides a blank space where the Victorian viewer could envision biblical dramas unfold. At the foreground, rock circles suggest recent campfires, while the chalky white valley spreads into sloping mountains, drawing the gaze upward to Mount Serbal. The angle of the sun creates a stark diagonal on the small mount on the right of the frame, which continues downward into the shade of the shrubby tree toward the supposed site of the spring. Frithâs Mount Serbal from Wadee Feyran was initially published in an 1862 edition of The Holy Bible, the first Bible in Great Britain to be illustrated using photographs.


Object Description
"Mount Serbal From Wadee Feyran. Desert & trees in the foreground, rocky mountain behind. Signed & dated in the negative. Printed credit, date and title on the mount."
Keywords Click a term to view the records with the same keyword
This object has the following keywords:
Albumen print, Desert
Portfolio List Click a portfolio name to view all the objects in that portfolio
This object is a member of the following portfolios: