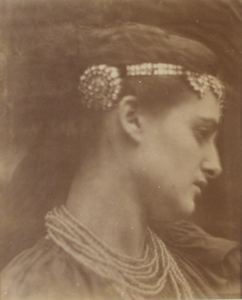 Commentary
Julia Margaret Cameron took up photography later in life. When she was 48, her daughter gave her a camera with a note that said, âIt may amuse you, Mother, to try to photograph during your solitude at Freshwaterâ1. Although Cameron had no prior knowledge of photography, she pursued this newly emerging art form in earnest. In an era when photography and painting lay at opposing ends, Cameron tried to bridge them by imitating oil painting in her photographs. She received a lot of criticism for her soft focus, so called âfancy portraits,â but Cameron dismissed these reviews and stuck to her unique aesthetic. Cameronâs interest lay in making âbodily forms immortal beingsâ2 by erasing the everyday details of her servants, friends, and family and transforming them into characters from Greek mythology, Shakespeare, and the Bible.

Unlike her distinguished male sitters, such as Charles Darwin and Sir John Herschel, her female sitters were not famous. She sought out faces that would embody her ideas of femininity and purposely obscured the details in order to eliminate references to class, era, or style. It was this approach that allows these portraits to stand as timeless ideals of femininity.

In Zoe, Cameronâs unique style of photography is captured. A heroine of the Greek War of Independence in 1821, Zoe, an eloquent orator, called for revenge and ignited the spirit of resistance among the people of Mycone. Marie Spartali, daughter of the Consul General of Greece in London, modeled as the heroic Zoe in this portrait. The picture is soft and slightly blurred, in Cameronâs traditional style. Her turned head and downward gaze may indicate modesty or refer to Zoeâs childhood timidity, but at the same time her pose embodies composure and strength. Cameronâs images are posed and precise in their rendering of the ideal. While Zoe is a Greek heroine, Cameron reveals her in accordance to the feminine ideals that women were measured against in Victorian Era England. Yet, even as she bows to the standards of that era, Cameron still expresses eternal qualities of feminine beauty that speak to us today.

Zoe was a figure from modern history, an orator advocating for her peopleâs freedom in the Greek War of Independence. Cameron created several studies of the heroine, as she did with most of the historical and mythological figures that interested her. Cameron refers to her contemporary, Lord Byron, in another depiction of the woman, referencing Zoe as the âMaid of Athensâ in an allusion to Byronâs lines of verseâ "Maid of Athens, ere we part, / Give, oh, give me back my heart!" In this fanciful portrait of Zoe, Cameron seeks to create the lonely beauty and longing she imagines in the woman rather than a historically accurate depiction of her.


Object Description
Zoe was a heroine of the Greek War of Independence in 1821. She was reputed to be shy until the Turks attacked MyconÃ©, killing her father. Zoe then became an eloquent orator calling for revenge at public meetings and raising the spirit of resistance among the people of her island. Finally, the Greek senate voted to provide ships and troops to defeat the invaders. The model for Zoe is Marie Spartali whose father was the Consul General of Greece in London.
Keywords Click a term to view the records with the same keyword
This object has the following keywords:
Albumen print, Females
Portfolio List Click a portfolio name to view all the objects in that portfolio
This object is a member of the following portfolios: