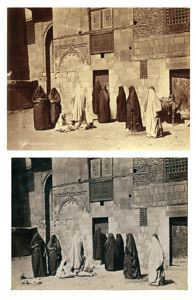 Commentary
Little is known of the photographer Henri BÃ©chard prior to his establishing a photographic studio, Maison BÃ©chard, in the Ezbekiah Garden District of Cairo in 1868. From this studio he sold a standard assortment of travel viewsâancient monuments, street scenes, and local colorâto a steadily increasing tourist market. His photographic enterprise coincides with a surge in travel to Egypt. The year 1869 saw the beginning of package tourism to Egypt and the Middle East, and the opening of the Suez Canal, which attracted a number of European visitors. Sometime between 1870 and 1872, BÃ©chard joined forces with another Frenchman, Hippolyte Delie, and together they acquired the photographic concession for the recently re-opened antiquities museum. The result, Album du MusÃ©e Boulaq: Photographie par DÃ©liÃ© et BÃ©chard, avec texte explicatif par Auguste Marriette Bey (Cairo 1872), was a beautifully produced volume of photographs of arranged objects from this first collection of Egyptian antiquities on view in Egypt. BÃ©chard's work was recognized with a gold medal at the Paris Universal Exposition of 1878. In 1888, BÃ©chard published, through A. Palmiere, L' Ãgypte et la Nubie, a volume of 150 photo-gravures from his views of monuments and sites. Although the work for which BÃ©chard was best known and the work cited for the gold medal award was the series of archaeological monuments and sites, he was a sensitive photographer of the people of the region. Where others primarily relied on staged studio photographs, BÃ©chard frequently left the studio to pose his subjects in the streets against Cairo's stone architecture. These views, such as Arab Women Going to the Baths, show a fastidious attention to composition. The women are arranged to articulate the space; posed to suggest the daily flow of visitors to and from the baths, with the addition of two seated figures, a couple of dogs, which travelers frequently mentioned as Cairene nuisances, and a patient burro in the background, all to impart a sense of reality to a scene seemingly captured in the flow of Cairo life. Of course, everyone and everything were carefully positioned for the relatively long exposure. Kathleen Stewart Howe Sarah Rempel and Herbert S. Rempel â23 Director of the Pomona College Museum of Art, Professor of Art History, Pomona College


Dimensions
Each print measures 8 x 10 1/4 inches.
Marks
One of the two prints is signed in the negative. Titled and numbered (65 and 315) in the negative.
Medium
Two albumen prints mounted on one mount.
Object Description
Henri BÃ©chard is best known for his photographs documenting his travels in the middle-east, especially his photographic work in Egypt and Turkey between 1870 and 1885. This image is likely from this period of his travels. His subjects range from portraiture to architecture and landscape photography.
Keywords Click a term to view the records with the same keyword
This object has the following keywords:
Albumen print, Groups
Portfolio List Click a portfolio name to view all the objects in that portfolio
This object is a member of the following portfolios: