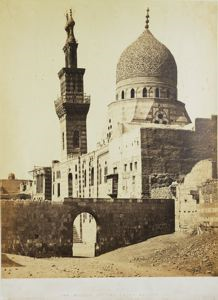 Commentary
Visitors to Cairo can still find the Mosque of Emeer Akhoor (Amir Akhur), the âmaster of the horseâ in the Kanebek neighborhood today. Frith took this image of the mosqueâs madrasa and mausoleum using the wet collodion processing technique during his second voyage to Egypt and Palestine in 1858. Built in 1503, the mosque complex belonged to the master of the stables of Sultan al-Ghuri, who reigned over Egypt from 1501 to 1516, during the Circassian Dynasty (1). Frith highlights the exemplary late-Mamluk period architectural details of the mosque by leaving the simple stone wall and arch of the foreground in shadow and illuminating the stone dome and the minaret tower. Thus, the albumen print captures the Arabesque surface of the stone dome, a construction unique to Egypt at the time, and its forked lower-leaf design, as well as the double finial minarets with great detail. Outside the madrasaâs entryway, the stone heap and lack of contemporary life suggest a mosque in ruins. However, as W.M. Thackeray comments in his travel memoir, Notes on a Journey from Cornwall to Grand Cairo, this is a ruse (2). When Frith photographed antiquities with the mass market in mind, he created frames devoid of modern buildings and local residents. The lack of contemporary life was intended to provide an English audience with a space in which to imagine the epic scenes of antiquity.


Object Description
View of the domed mosque & a minaret. Signed & dated in the negative. Mounted on modern card.
Keywords Click a term to view the records with the same keyword
This object has the following keywords:
Albumen print, Architecture, Mosques
Portfolio List Click a portfolio name to view all the objects in that portfolio
This object is a member of the following portfolios: