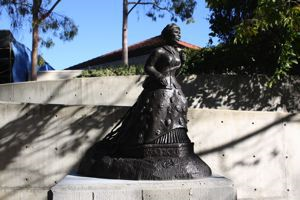 Commentary
Always, I went back. Died, March tenth. Crossed over, free. I stand in this bronze incarnation, roots of struggle stitched on

the bustle, faces of unnamed risk-takers tatted on the skirt of a scout, spy, nurse, train; a woman singing we mean to be free.
(Lynne Thompson, âSwing Low, Freeâ)

The poem excerpted above was written for Alison Saarâs sculpture Swing Low: Harriet Tubman Memorial. Lynne Thompson read âSwing Low, Freeâ during the formal installment of Saarâs maquette in the new Scripps Sculpture Garden on Harriet Tubman Day, March 10, 2010. The maquette is a smaller version of the full-sized sculpture commissioned for the Harriet Tubman Memorial Plaza in Harlem. The titles of both the poem and the sculpture reference the popular Negro spiritual âSwing Low, Sweet Chariot.â On the surface, the song seems to beckon to a chariot from heaven, but scholars assert that the lyrics are actually a coded reference to the Underground Railroad.

Born Araminta âMintyâ Ross in Dorcester County, Maryland around 1822, Tubman escaped to Philadelphia in 1849 with the help of the Underground Railroad. She then shed her slave name to conceal her past and became known as Harriet Tubman. Tubman returned to the South numerous times over the next ten years to help other slaves travel the Underground Railroad to freedom. She served the Union Army as a nurse and a spy. As one of the key advisors for the Combahee River Raid in 1863, she was the only woman to plan a battle during the Civil War. The Combahee River Raid remains one of the most successful armed assaults ever to be led by a woman in American military history. After the war, she continued to work for equality as an abolitionist, an advocate of womenâs suffrage, and an activist for the homeless and physically disabled. Thompsonâs words capture the many roles that Tubman fulfilled both literally and symbolically: âa scout, spy, nurse, train.â

The line also reflects Alison Saarâs intentions as a sculptor: she has said that she wanted to depict Harriet Tubman ânot so much as a conductor of the Underground Railroad, but as an unstoppable locomotive.â In Swing Low, Tubmanâs body tilts slightly forward as though propelled by an unseen force. Her set jaw conveys a powerful sense of resolve. Mask-like facesârepresenting âunnamed risk-takers,â the slaves Tubman led to freedomâadorn her skirt. The roots trailing from her bustle have dual symbolism. They are the roots of slavery pulled up in her wake, and they are the roots of an old life abandoned on the journey to freedom. Cast entirely of bronze, Swing Low provides a gleaming focal point at a three-way intersectionâa symbolic location in the Scripps sculpture garden given Tubmanâs work to gather slaves from many different places.

The casting of the piece was made possible by a generous donation from Jacqueline Avant, and the base was a gift to Scripps from Carole Vernon and Robert Turbin.

Alison Saar (â78) is one of Scrippsâ most distinguished alumnae. She studied African and Caribbean Art under Dr. Samella Lewis and wrote her thesis on African-American folk art. In 1981 Saar received her MFA from Otis Art Institute, where she discovered her love of sculpture. Her artwork explores complexities of gender and racial identity.

Excerpt reprinted with the authorâs permission.

Front
Portfolio List Click a portfolio name to view all the objects in that portfolio
This object is a member of the following portfolios:

Your current search criteria is: Keyword is "BAT".