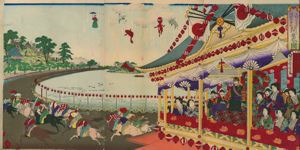 Credit Line: Purchased with funds from the Aoki Endowment for Japanese Arts and Cultures
Accession Number: 2007.1.134

Your current search criteria is: Objects is "Shinobazu Pond in Ueno".