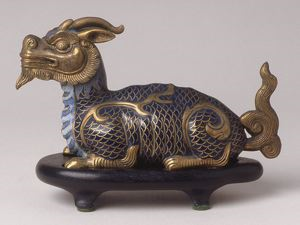 Commentary
Confucius (551-479BC) was the most influential man in Chinese history, and he had much to say about what it takes to be a great leader. A teacher and philosopher who lived during the turbulent Eastern Zhou dynasty (771-221BC), he looked back to the earlier Western Zhou dynasty (1050-71BC), which he regarded as a golden age, when rulers were benevolent and subjects were contented and law-abiding. Confucius believed that if a ruler acted with compassion towards his subjects, and with ritual decorum and filial piety towards his own parents and ancestors, his subjects would be content, and peace and prosperity would prevail. Conversely, if a ruler is corrupt or evil, his people will be miserable and his domain will collapse into chaos.

Over the centuries, the concept of virtuous rulers and administrators continued to be important in China and the other cultures influenced by Confucian ideas. Many rulers attempted to demonstrate their virtue in symbolic ways, often hiring artists to paint harmonious mountain landscapes that symbolized a benevolent rule and decorate robes and objects with images of the unicorn-like qilin, a creature that was believed only to appear during the rule of a benign ruler. Qilin are typically depicted with a single horn, the hooves of a horse, the body of a deer, scales, and the tail of an ox.


Dimensions
The stand measures 1 x 5 x 2 1/2 inches.
Marks
There are green felt stickers on each leg, paint the number "22" painted on the rear. The stand has a sticker which reads "48A" on it.
Medium
Multicolored enamels on a cast copper base. Accompanied by a stained wooden stand.
Object Description
Chinese cloisonÃ©e creature with two toned lighter blue stripes which run from the chin to the base of his neck. Accompanied by a wood stand.
Keywords Click a term to view the records with the same keyword
This object has the following keywords:
Cloisonne, Mythological Creatures
Portfolio List Click a portfolio name to view all the objects in that portfolio
This object is a member of the following portfolios:

Your current search criteria is: Objects is "Chinese CloisonnÃ© Qilong".