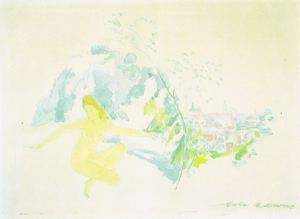 Born in Utica, New York, Davies gained a reputation for ethereal figure paintings that expressed lightness and mysticism. He attended the Chicago Academy of Design and from 1879 to 1882, traveled in the West, to Colorado and Mexico City, where he worked as a drafting civil engineer. He briefly attended the Chicago Art Institute, and in 1885 moved to New York City where he studied at the Art Students League and Gotham Art Students League. He supported himself as a billboard painter, engineering draftsman, and magazine illustrator.

He was one of eight artists included in the landmark exhibition at the Macbeth Gallery in 1908 which was organized as a protest to the conservative tastes of the National Academy of Design. Many of the artists of âThe Eightâ, including Robert Henri, George Luks, William Glackens, Everett Shinn, George Bellows, Alfred Maurer and John Sloan, followed the realist aesthetic of what became the Ashcan School. Davies was also a principal organizer of the 1913 Armory Show that revolutionized American art by introducing modernism to the viewing public.


Provenance
Unknown.
Keywords Click a term to view the records with the same keyword
This object has the following keywords:
19th century, Landscapes, Nudes
Portfolio List Click a portfolio name to view all the objects in that portfolio
This object is a member of the following portfolios:

Your current search criteria is: Portfolio is "Nudes".