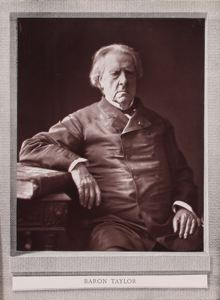 Commentary
Woodburytype from the Gallerie Contemporaine.

Taylor's Nadar (Gaspard-FÃ©lix Tournachon, 1820-1910) persists as one of the most brilliant French portraiture photographers of the nineteenth century, due to both his formal skill and the esteemed circle of friends and acquaintances that he brought into his studio. One of the sensitive portraits born out of Nadar's gregarious personality is this image of Baron Isadore Taylor (1789-1879), the royal commissioner of the ThÃ©Ã¢tre-FranÃ§ais in Paris. Taken in Nadar's intimate home studio, this image bestows great dignity upon the aged Baron and exemplifies Nadar's skill at handling light and capturing personality. The light sweeps in from the left, strong enough to create a dynamic interplay between highlights and shadows, but still gentle enough to reveal the lush softness of the folds in Baron Taylor's double-breasted coat. It catches upon and highlights the knotted joints of his hands and the craggy plains of the left side of his face, leaving his right side in shadow. Yet we still can make out his likeness; the photograph does not sacrifice the documentary nature of the portrait for atmosphere. Instead, subtle variations in tone convey his eye and the bag under it, the sweep of his cheek and the shadow of his nose. Likewise, we can make out the exquisite carving of the table and the wear upon the massive tome that supports the man. These details, combined with a sense of atmosphere, provides us with an image of a Baron whom we can understand as contemplative, regal, and noteworthy. Such delicate lighting usually suffers when reproduced, as the details are lost through shading techniques such as crosshatching. Nadar, however, embraced innovative photographic techniques such as the woodburytype process that created this image. In this process, the exposed negative is used to create an intaglio plate, allowing for the rapid printing of many precise copies of the captured image. More remarkably, this method appears almost identical to more traditional modes of photographic printing, because it is the only mechanical printing process that allows for a true and complete gradient of middle tones. It is due to this unique printing technique that we can appreciate Baron likeness and the true nuance of Nadar's use of light. Kathryn Hunt â11 Wilson Intern 2010


Marks
Credit and title printed on the mount recto.
Object Description
Baron Isadore Taylor was a prominent 19th century French playwright and writer.
Keywords Click a term to view the records with the same keyword
This object has the following keywords:
Collotype, Males
Portfolio List Click a portfolio name to view all the objects in that portfolio
This object is a member of the following portfolios:

Your current search criteria is: Portfolio is "Males" and [Objects]Object Type is "Photography" and [Objects]Period is "Early Modern 18th-19th".