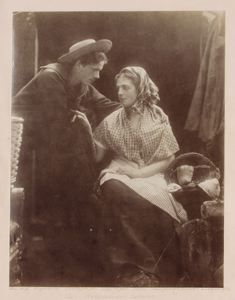 Commentary
In her efforts to elevate photography to an artistic level, Cameron frequently referenced Victorian genre painting in her scenes and their titles. This narrative study is the first half of a two-part series that concludes with "The Fishermanâs Farewell" the same year. Cameron uses her signature soft focus and atmospheric lighting to dramatize the relationship between the fisherman and his wife. Through the use of intense lighting, the photograph draws our attention to the woman, while the fishermanâs profile indicates his attention to her and the affection in the relationship.


Marks
Signed, titled and dated in ink on the mount recto, Colnaghi blindstamp in the mount.
Object Description
Julia Margaret Cameron began to practice photography close to the age of 50, and soon became friends with prominent figures from both the sciences and the arts, including poet Lord Alfred Tennyson, scientist Sir John Herschel and painter G.F. Watts. Known as a pictorialist photographer, she was particularly adept in using long exposures, soft focus and atmospheric lighting conditions to create powerful portraits and allegories. The Fishermanâs Return is one half of a series including the Fishermanâs Farewell, of the same year.
Keywords Click a term to view the records with the same keyword
This object has the following keywords:
Albumen print, Males, Workers
Portfolio List Click a portfolio name to view all the objects in that portfolio
This object is a member of the following portfolios:

Your current search criteria is: Portfolio is "Males" and [Objects]Object Type is "Photography" and [Objects]Period is "Early Modern 18th-19th".