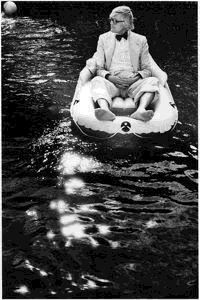 Commentary
Childers had regularly photographed British artist David Hockney for more than ten years when he captured this shot of Hockney in an inflatable boat. Arguably the most iconic photograph of Hockney ever taken, Childers was inspired by an image of the French photographer Jacques Lartigue (1894â1986), of Lartigueâs brother in a suit floating in an inner tube. Childers convinced Hockney to take this shot in Childersâ own swimming pool, and Hockney agreed, despite the expensive Savile Row suit he was wearing. The setting is especially fitting as Hockney employed the motif of California swimming pools in many of his own paintings.


Marks
The work is signed on the front (lower right, border) and bears the title âDavid Hockney at Rising Glen,â edition number 52/60, and year of creation â1978â on the back.
Object Description
Hockney, at the photographer's home in the Hollywood Hills, is photographed sitting in an inflatable raft while dressed in a fine suit, complete with bowtie.
Keywords Click a term to view the records with the same keyword
This object has the following keywords:
Artists and Craftsmen, Gelatin silver print, Males
Portfolio List Click a portfolio name to view all the objects in that portfolio
This object is a member of the following portfolios:

Your current search criteria is: Portfolio is "Males" and [Objects]Object Type is "Photography" and [Objects]Period is "Contemporary 1946-present" and [Objects]Display Artist is "Michael Childers".