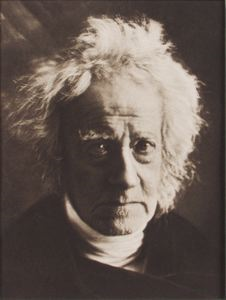 Commentary
During the 1860s, near the beginning of her relatively short photographic career, Cameron photographed Herschel, the celebrated English mathematician, astronomer, and photographic scientist. She had begun practicing photography in her late forties, upon receiving a camera from her daughter. Cameron routinely photographed her family, servants, and friends, such as Herschel, whom she met in her early twenties. In this photograph, dramatic lighting emphasizes Herschelâs brilliantly white hair, while casting the right half of his face into shadow. It also draws attention to his bushy right eyebrow, glistening eyes, and thin lips. She emphasizes these details, as well as the heavy circles under his eyes, deep wrinkles on his forehead, and rough texture of his chin. In this way, Cameron suggests that Herschelâs internal mental exertions are manifested in his weary physical appearance.

Cameronâs characteristic style of producing slightly blurred images, as evidenced in this photograph, foreshadows one distinguishing characteristic of the photographic movement known as Pictorialism, which gained momentum in the early 1900s. Here, Herschelâs unruly hair is particularly indistinct, appearing as if it were captured in motion. As Cameron requested that Herschel leave his recently washed hair uncombed, his wild locks become a sign of his quick mind. Herschelâs glistening eyes also provide a link between his external and internal characteristics. Cameron thus captures a dynamic image of Herschelâs external appearance, while skillfully suggesting the genius within.

Cameronâs respect and admiration for her mentor?the mathematician, astronomer, and experimental photographer Sir John Herschel?are encapsulated in this portrait. Herschel is credited with introducing Cameron to the first photographs she ever saw, and years later she convinced him to pose for a portrait. Cameron visited the esteemed intellectual at his home to take the photograph, and she insisted his hair be washed and left uncombed for the picture. Backlit, his white, flossy hair forms a halo of light around his face, while his unwavering expression conveys the conviction and intensity of the man.


Marks
Title printed in the margin.
Object Description
Photogravure from "Sun Artists". Sir John Frederick William Herschel (1792-1871) is the celebrated English mathematician and astronomer. He also made great contributions to the improvement of photographic processes, including the cyanotype and daguerrotype, and coined the terms âphotography,â ânegativeâ and âpositive.â
Keywords Click a term to view the records with the same keyword
This object has the following keywords:
Males, Photogravure
Portfolio List Click a portfolio name to view all the objects in that portfolio
This object is a member of the following portfolios: