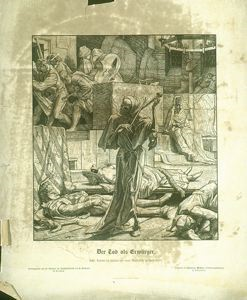 Commentary
This print is a copy of Alfred Rethelâs wood engraving. The caption at the bottom of the print reads, âErster Auftritt der Cholera auf einem Maskenball in Paris 1831,â which, translated, reads: âThe first outbreak of cholera at a masked ball in Paris, 1831.â Alfred Rethel (1816-1859) was a German history painter. He began his art career in decoration at the imperial hall in the RÃ¶mer (a medieval building owned by the city of Frankfurt, Germany). However, as mental derangement from childhood trauma began to manifest, his paintings and prints began to demonstrate a mixture of madness and sanity. In this print, he juxtaposed music and death. In the center of the print, a skeleton, probably a personification of death, among the dead, holds two bones like a violin and bow. A crowd of musicians is fleeing from the scene with their instruments.
Medium
Black ink engraving on off-white paper.
Object Description
Ninteenth century black and white engraving of the figure of death playing the violin with bones with masked dead at his feet, and others running away. In a Northen Renaissance style.
Keywords Click a term to view the records with the same keyword
This object has the following keywords:
19th century, Death, Males, Musicians, Plays and Theatre
Portfolio List Click a portfolio name to view all the objects in that portfolio
This object is a member of the following portfolios:

Your current search criteria is: Portfolio is "Males" and [Objects]Display Artist is "Alfred Rethel".