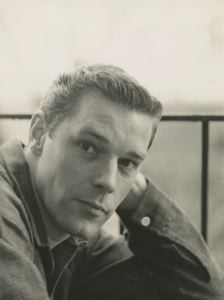 Commentary
Scott Merrill (July 14, 1918-June 19, 2001) was born in Baltimore, MD. He was an actor, known for âThrillerâ (1960) and âNew York Confidentialâ (1959). He was nominated for Broadwayâs 1956 Tony Award as Best Supporting or Featured Actor (Musical) for âThe Threepenny Opera.â Mr. Merrill not only starred with Weillâs widow, Lotte Lenya, who played Jenny in âThe Threepenny Opera,â but also appeared with Tallulah Bankhead as Felix da Costa, a shallow European dilettante in âEugenia,â Randolph Carterâs 1957 Broadway adaptation of the Henry James novel âThe Europeans.â Mr. Merrill initially attracted notice in shows like âBloomer Girl,â âPaint Your Wagonâ and a revival of âPal Joey.â He was first seen in New York in 1941 in âLady in the Dark,â which starred Gertrude Lawrence, Danny Kaye, and Victor Mature. Other credits included âLove Life,â âSmall Wonder,â Oklahoma!â and a 1955 musical adaptation of âSeventh Heaven.â
Marks
Verso:
On the upper left corner is,"JLCEL-107" and "1200" written 3/4" from each other, done in pencil.
3.5" to the left of the right edge and 5" below the top edge is a blue stamp that says, "Please Credit Jacques Lowe. Do not reproduce without special permission and credit line.â
On the bottom right corner is, "2017.12.66" written in pencil.


Medium
vintage gelatin silver print
Keywords Click a term to view the records with the same keyword
This object has the following keywords:
Actors and Actresses, Males, Performers
Portfolio List Click a portfolio name to view all the objects in that portfolio
This object is a member of the following portfolios:

Your current search criteria is: Portfolio is "Males" and [Objects]Country is "Germany" and [Objects]Display Artist is "Jacques Lowe".