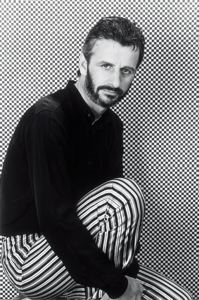 Commentary
This photograph of Beatlesâ drummer Ringo Starr was taken on December 9th, 1980 for the April 30, 1981 cover of Rolling Stone. Starr would release his album Stop and Smell the Roses later that year, featuring some songs produced by his former band mates George Harrison and Paul McCartney. Starr appears somber and brooding, undoubtedly caused by John Lennonâs death the previous day. In contrast to Starrâs serious demeanor is the checkered Bridget Riley poster and his striped pants. The patterns combine to form an energetic, dynamic air at odds with the gravity of Starrâs expression. Soon after this was taken Starr and his wife, then-girlfriend Barbara Bach, would return to New York City to be with Lennonâs widow, Yoko Ono.

(Reference: Icons and Legends: The Photography of Michael Childers)


Marks
: The work is signed on the front (lower right, border) and bears the title âRingo Starr,â location âHollywood,â edition number 24/30, and year of creation â1980â on the back.
Object Description
Ringo, wearing striped slacks, poses before a background in a small, black-and-white pattern.
Keywords Click a term to view the records with the same keyword
This object has the following keywords:
Gelatin silver print, Males, Musicians, Portraits
Portfolio List Click a portfolio name to view all the objects in that portfolio
This object is a member of the following portfolios: