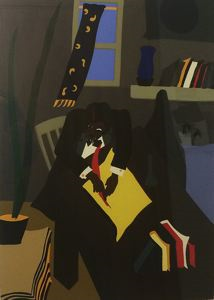 Commentary
Jacob Lawrence is remembered as one of the most influential black artists of the twentieth century. He developed a distinct style that he called âdynamic cubism.â His prints are flat planes of dark colorsâshades of gray, brown, dark blues and greensâthat are strategically punctuated with deep jewel tones. This particular image is the twenty-first from Lawrenceâs Frederick Douglass Series.

Douglass was a nineteenth-century African-American abolitionist and former slave. He is most well known for his autobiography, "Narrative of the Life of Frederick Douglass: An American Slave," where he recounts his life as a slave. Perhaps the most significant theme running through the text is that of education. As the narrative progresses, Douglass is sold to new slave owners, the Aulds. Mrs. Sophia Auld takes it upon herself to teach Douglass to read and write. The course of Douglassâs education is interrupted when Hugh Auld forbids his wife from continuing their lessons. According to Auld, education has the potential to âruinâ slaves. He wasnât wrong. Hearing this, Douglass begins to recognize that the institution of slavery relies upon slavesâ ignorance as a means of perpetuating slavery. From then on, Douglass devotes himself to learning as much as he can. Douglass recognized that education allowed slaves to proclaim their humanity. Above all education planted the seeds of resistance. Still, education wasnât enough to truly, or physically free slaves. That being the case, for the most part, Douglass wrote for an audience of white abolitionists. Hence, Douglassâs narrative can be read as a sort of call to action, primarily directed at those abolitionists.

This work features his unique take on âcubism,â as well as his impressive command over composition. It is easy to see the influence that Spanish artist, Pablo Picassoâs Cubism had on Lawrence. He uses the same flat plane, and sharp, overlapping shapes to bring his forms to life. However, Lawrence guides your eye through the signature use of bright, intense colors. His color choices, he says, are representative of what he saw in many black lives, primarily in homes. This return to familiarity is a nod, even an exaltation of, the beauty of black lived experience.

Here, Lawrence highlights the importance of Douglassâs education and literacy by accenting the piece with his trademark splashes of color. Often Lawrence's color choices offer the viewer a sort of experiential roadmap. For example, if you look closely, youâll see that many of the items highlighted by intense hues share something in common: for the most part, they are instruments of learning. The red, yellow and white books on the shelf are angled toward Douglassâs hunched figure. The intense hue of both the book and quill stand in contrast to the darker colors surrounding Douglass: the juxtaposition is visually striking. In essence, Lawrenceâs pieces offer honest and coherent representations: his application of âcubismâ tells us where to look, what he wants the viewer to focus and ruminate on.


Marks
In pencil:
bottom left, edition number
bottom center, title
bottom right, signature and '99
Medium
serigraph
Object Description
Printed in 1999
Keywords Click a term to view the records with the same keyword
This object has the following keywords:
Males, Portraits, Serigraphs
Portfolio List Click a portfolio name to view all the objects in that portfolio
This object is a member of the following portfolios:

Your current search criteria is: Portfolio is "Males" and [Objects]Century is "20th c" and [Objects]Display Artist is "Jacob Lawrence".