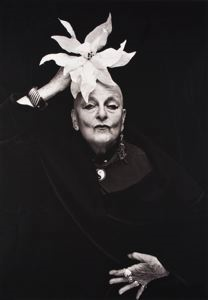 Commentary
Rachel Rosenthal (1926â2015) was a Russian-American performance art pioneer. She was born in Paris in 1926 and fled with her parents to Brazil and then New York during the Second World War. Rosenthal would return to Paris to immerse herself French theatre, only to relocate to New York City in 1953 and join the artistic community of Jasper Johns, Merce Cunningham, and John Cage. The composer Cage was particularly drawn to Zen Buddhism, and Rosenthal herself would be influenced by East Asian philosophy for the rest of her career. Childers photographed Rosenthal in 1999 at his Melrose Avenue studio in Hollywood, California.


Marks
This work is signed on the front (lower right, border), and bears the studio stamp and the signature "Michael" on the back.
Medium
ink on paper
Keywords Click a term to view the records with the same keyword
This object has the following keywords:
Dancers, Females, Portraits
Portfolio List Click a portfolio name to view all the objects in that portfolio
This object is a member of the following portfolios:

Your current search criteria is: Portfolio is "Dancers" and [Objects]Century is "21st c".