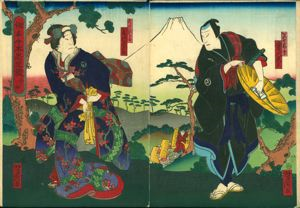 Credit Line: Purchased with funds from the Aoki Endowment for Japanese Arts and Cultures
Accession Number: 2008.1.3

Marks
Signature: Yoshitaki.
Object Description
Japanâs most famous loyalty-revenge story â Kanadehon ChÃ»shingura (The Treasury of Loyal Retainers), popularly known as ChÃ»shingura, is based upon events that occurred at the beginning of the eighteenth century. In 1701 Asano Naganori, lord of the provincial AkÃ´ domain (in present-day HyÃ´go Prefecture, central Japan) was placed in charge of ceremonial duties at the shogunâs castle in Edo (present-day Tokyo). He sought instruction from the master of ceremonial duties, Kira Yoshinaka but, naively, failed to offer the usual bribe. Kira humiliated Asano to the extent that the latter drew his sword and inflicted a slight wound on Kira. The penalty for drawing a sword in the shogunâs castle was strict: suicide for the offending lord, confiscation of property, and dispersal of retainers. Asanoâs retainers decided to avenge their masterâs death and adopted a strategy that culminated in a raid on Kiraâs mansion eighteen months later. They decapitated Kira and then paraded through the streets of Edo to the grave of their master at Sengakuji Temple where they placed the severed head on Asanoâs grave. The shogun could not permit the retainers to go unpunished because the vengeance represented a choice between loyalty to a vassal lord versus that to the supreme ruler, the shogun. The retainers were ordered to commit suicide and complied. Â  ChÃ»shingura, originally a jÃ´ruri (puppet) play in 11 acts in the jidamono (history play) style, was written by Takeda Izumo II, Miyoshi ShÃ´raku, and Namiki SÃ´suke in 1748. ChÃ»shingura was quickly adapted into kabuki. ChÃ»shinguraâs popularity has persisted for three centuries.
In this act, Hayano Kampei, distracted with his lover, Okaru, at the rear gate arrives too late to contain his master. Ashamed at his failure, Kampei decides to abscond with Okaru to her home in the country. The journey scene is titled âThe Fugitives,â a dance-drama with kiyomoto (shamisen) accompaniment and was added in 1833.

"In this act, Hayano Kampei, one of the 47 ronin, is distracted with his lover Okaru, and arrives too late to help revenge his master. Ashamed at his failure, Kampei decides to abscond with Okaru to her home in the country. The journey scene is entitled âThe Fugitives,â a dance-drama with shamisen accompaniment. This print was produced in Osaka, where Yoshitaki was a popular artist in the late 19th century."
(BC, student in 2010 seminar ARHI154 Japanese Prints)


Keywords Click a term to view the records with the same keyword
This object has the following keywords:
1869-1879, Actors and Actresses, Kabuki
Portfolio List Click a portfolio name to view all the objects in that portfolio
This object is a member of the following portfolios:

Your current search criteria is: Portfolio is "The Aoki Endowment for Japanese Art" and [Objects]Display Artist is "Utagawa Yoshitaki".