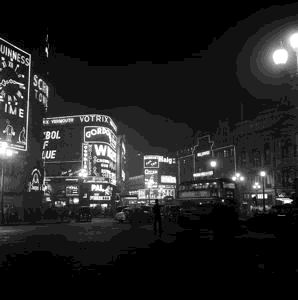 Commentary
"This image of Piccadilly Circus at night captures a lone bobby directing traffic while the magnitude of its timeless popularity showcases huge lite billboard advertisements such as Bovril, Schweppes Tonic Water, Wrigley's Chewing Gum, and Votrix. The movie feature at the London Pavilion to the left of the Statue of Eros is film-noir classic 'Black Tuesday' starring Edward G. Robinson released May 6th, 1955. This image is one of six in a series."
(Sean Black, son of James Black)

[Wall text from Art Pix #1: Streetview: A Spectrum in Black and White]
"This dynamic photograph depicts a constable, or âbobby,â amid the bright billboards of Londonâs Piccadilly Circus. Immediately striking is the way that the artist contrasts Piccadillyâs starry billboards against a pitch black night sky. Equally significant, however, is the way that the imageâs empty foreground manipulates the viewerâs sense of scale, turning a crosswalk into a wide vista. Though the image emphasizes Londonâs grandeur, the constableâs centrality nonetheless forces the viewer to remember humanityâs place in the urban environment. The constable actually invites the viewer to seek out other figures in the image, and to think of the city not as a lifeless landscape of neon and pavement, but as a home to millions. Indeed, the photographâs brilliance lies in its ability to showcase Londonâs magnificence while reminding the viewer of its human scale." (Tara Contractor SC '13, Academic Year Wilson Intern, 2010-2011)


Edition
1/25
Medium
Gelatin silver print, hand-printed from medium format negatives on photographic paper, selenium toned.
Keywords Click a term to view the records with the same keyword
This object has the following keywords:
Street Scene, Urban
Portfolio List Click a portfolio name to view all the objects in that portfolio
This object is a member of the following portfolios:

Your current search criteria is: Portfolio is "Street Scene" and [Objects]Display Artist is "James H. Black".