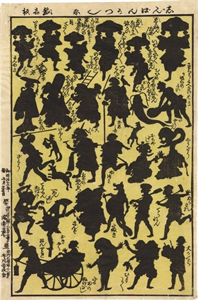 Commentary
"New Print of utsushi-e" (Shinhan utsushi-e). A parade of 30 silhouettes (kage-e or
utsushi-e)* of figures and animals that depict the images used as kage-e or utsushi-e for
slide shows similar to that of Magic Lanterns, which were a curiosity at that time. We see
in the first row six dancing figures who display the 6tsue-bushi dance. The text mentions
names such as Taemon and Urashima Tar6. The figures of the second to third rows are
based on 6tsu-e, which were painted as talisman pictures against evil and distributed by
Mitsui-dera Temple in 6tsu, Province 6mi near the Biwa Lake. These were known as Ten
Kinds of subjects in 6tsu-e (6tsu-e jusshu), which were particularly popular figures and
refer to the special effectiveness of the pictures. Seen in the second row: the first halfnaked
man who is trying to catch a large namazu eel into his hy6tan gourd, referring to
the famous Zen question and answer and symbolizes that everything develops smoothly
and one can keep harmonious relationships; that like a fish in water. The falconer, owakashimo
symbolizes to gain an advantage and to find even the things you have lost.
The next two figures are from the Seven Gods of Good Fortune, "Oaikoku" with the ladder
chasing "}ur6-jin" with a tall head running away with Daikoku's good luck mallet.
Oaikoku has to catch him, in order to step up the ladder so that he can reach the top of
}ur6-jin's head to shave. These figures symbolizes a long life Uur6-jin) and all the cherished
wishes come true by the mallet of luck (Oaikoku-ten). The last dancing figure with a
branch of wisteria, "Fujimusume", symbolizes a charming young lady, who will have a
good marriage partner. In the third row: the first two figures, nyud6 a tonsured monster
with a kiseru tobacco pipe refuses a cup of tea served by a woman, "ocha dashi''. (The
meaning of this pair not known.) The third figure, yarimochi "yakko" carrying a spear
symbolizes safety for a journey. The fourth figure shows "oni no nenbutsu" meaning the
oni devil in sacred robe with his attributes, which include an umbrella, a donation
notebook and a hammer for hitting the bell. This devil can quiet a crying child at night
and protect from other devils. The next, "zat6", is a blind man with a long stick who fends
off a dog which pulls his trailing clothes. His profession was musician or healing masseur.
In the fourth row: the first figure seems to be a farmer with a hoe, "baka-tare", a stupid
person, the second "teu-ren?", the third a badger "tanuki", the fourth "san-zu", the fifth
"ippon-ashi" a one-legged ghost, the last, "ch6chin obake", a lantern ghost. Describing the
fifth row: the first "okagura", a sacred music performer (a street musician) and a dancer
with a large mask of oni devil over the shoulder, the third "Daruma-no-nuke ashi" Daruma
with his legs sticking out. The Daruma figure normally shows no legs. The last pair, a lady
on a rikish6 and a rikish6 carrier. The artist Otojiro was a student of Toyohara Kunichika.
* The background of Nishiki kage-e: By the end of the Edo Period, imported articles
from Holland were adopted into Japanese way such as "Magic Lantern", an apparatus for
slides show with moving figures. Around 1803 when a Magic Lantern was imported it was
not possible to obtain either flat metal nor glass in Japan, therefore, the apparatus out of
metal was reconstructed by Japanese into a wooden case, called "furo", and glass slides
were used with paper with painted figures and settings. This is the beginning of the slide
show of story telling and drama in Edo. This slide show was called Utsushi-e in Edo and
Nishiki kage-e in Kansai Area, where 6mi Province is situated. Among Ukiyo-e these kind
of pictures were widely spread as a category of asobi-e (pictures of playing).
Published by Kaizaki Kishichi in 1879.


Medium
Woodblock print
Portfolio List Click a portfolio name to view all the objects in that portfolio
This object is a member of the following portfolios:

Your current search criteria is: Portfolio is "Recent Acquisitions" and [Objects]Period is "Meiji (Japan, 1869-1912)" and [Objects]Display Artist is "Morikawa Otojiro".