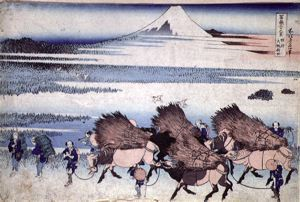 Marks
On verso in pencil, lower left: 46.1.101, Hokusai, Jo IX 68. Signed: Zen Hokusai Iitsu hitsu. Censor's seal: Kiwame.
Medium
Nishiki-e, horizontal oban; colored ink on paper.
Object Description
Edo period color woodblock print depicting early morning in the marshy patties of Ono, with mist rising from the wet grasses while waterfowl skim the surface of the water. Fuji solemnly rises through the mist to the sky; it touches the upper edge of the picture. This ethereal landscape dramatically contrasts with the human activity revealed in the foreground. A group of farmers leads five oxen laden with mountainous bundles of reeds, while two women carry smaller bundles of grass on their backs. They have finished their morning labors and are going home for breakfast.

"New Fields' was a name applied to fields recently brought under cultivation. During the Edo period, the shogun and local governments made an effort to expand arable lands in order to support an increasing population, and also to increase taxable lands. Wild or marshy lands were reclaimed. The "New Fields of Ono" must depict an expanse of such marshy land being cultivated, perhaps for reeds.

The simple design with fewer landscape elements successfully depicts a benevolent nature that embraces human life. The color scheme is also simple; a single shade of blue dominates, except for the pink sky on the right flank of Fuji and broad brown areas of reeds and oxen.


Publisher
Eijudo (Nishimura-ya Yohachi) seal.
Keywords Click a term to view the records with the same keyword
This object has the following keywords:
1821-1840, Mountains
Portfolio List Click a portfolio name to view all the objects in that portfolio
This object is a member of the following portfolios:

Your current search criteria is: Portfolio is "Johnson Collection of Japanese Prints" and [Objects]Century is "19th c" and [Objects]Period is "Edo (Japan, 1615-1868)" and [Objects]Display Artist is "Katsushika Hokusai" and [Objects]Object Type is "Print".