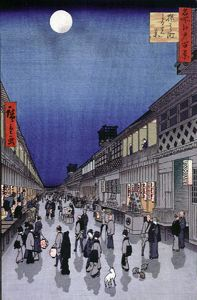 Commentary
Through his highly evocative series, One Hundred Famous Views of Edo, Utagawa Hiroshige reinvents Edo, capturing the uniquely powerful moods of the city through imaginative compositions. This, the ninetieth print of the series, embodies an atypically quiet hour in the new theater district of Saruwaka-machi.

Named after its famous kabuki founder, Saruwaka Kanzaburo, Saruwaki-machi was one single street, with theater companies arranged in order of seniority. The boxed turrets, or yagura, mounted on the rooftops of the buildings on the right, indicate the three official kabuki theaters.

Hindered only by a subtle wisp of cloud, the full moon sets the scene, casting light down softly over the street below. The attention Hiroshige pays to the figures' shadows exemplifies his efforts to create a realistic depiction of light. While the storefronts would usually be garishly decorated with kabuki advertisements, here Hiroshige leaves them in a monontone, altering the lively mood of the street. The sky exhibits an effective use of the bokashi technique, a printing method wherein the printer wipes away some of the ink from the block to create color gradation.


Marks
On verso in pencil: Hiroshige I Johnson 84. On mat in pencil: Johnson Collection, Night View of Sawuwaka-Machi 46.1.107 Hiroshige 100 Views of Edo Meisho Edo hyakkei #90. Censor's seal: Aratame and date seal (Tatsu-kyu).
Medium
Colored ink on paper; woodblock print.
Object Description
Color woodblock print with an image of a street though the theatre district of Asakusa in Edo (Saruwaka street), seen at night. Many people are on the street, which is flanked by buildings on both sides. Scaffolds on the roofs of the right-hand buildings are theatre signs. On the left are tea houses.

The full moon rises high in the autumn sky, its white perfection dimmed ever so slightly by a wisp of cloud slanting across its face. Â Its rays bathe the street below with silver light, displaying an array of shadows that seem to have a life apart from the gray and black figures that cast them. Â These shadows are central to the magical quality of this unusual print. Â Both for Western viewers accustomed to pictures with shadows and for Edo viewers to whom they were a curiosity, these particular forms have the similar effect of conjuring up a world that is not quite of this world.

The place depicted shares this quality of a world apart, for it is Saruwaka-machi, the segregated theater district of Edo. Â Throughout most of the Tokugawa period, the officially approved kabuki and puppet theaters were located in downtown Edo, in two separate neighborhoods. Â Following an 1841 fire that destroyed one of the districts, however, the moralistic bakufu reformer Mizuno Tadakuni decided it was time to abolish the theaters and refused permission to rebuild. Â Thanks to the persuasive powers of another Â bakufu official sympathetic to kabuki, however, Mizuno agreed to relocate the theaters to Asakusa, already an established center of popular pleasure, on a lot just northeast of Asakusa Kannon Temple and south of the Nihon Embankment.

The new theater district was named Saruwaka-machi, after Saruwaka Kanzaburo, the recognized founder of Edo kabuki and first in the premier Nakamura-za lineage. Â As we see in this view, saruwaka-machi was a single street, about 300 yards in length, with theaters and teahouses on either side. Â Although neither walled nor moated, it was, nevertheless, a world of its own, entered through a single gate at the south end (in the far distance here). Â The east side (to the left) appears as a solid row of teahouses, with waitresses seeing off guests from the veranda; in reality, the teahouses were interspersed with two puppet theaters.

On the west side, to the right, were the three official kabuki theaters, identifiable by the boxed turrets known as yagura perched on the roof above each entrance and serving as the mark of bakufu Â approval. Â The theaters were arranged from the entrance gate in order of seniority: first, in the distance, the Nakamura-za, then the Ichimura-za and finally, to the immediate right, the Morita-za, its yagura hidden by the series title.

The appearance of the Morita-za here, with its name clearly indicated on the assembly of fire buckets below, would have been of particular interest to Hiroshige's Edo viewers, since it had only recently reopened after being closed for almost two decades. Â In the interim, its performance rights had been exercised by an alternate, the Kawarazaki-za. Â In the wake of the great earthquake of 1855, however, the Kawarazaki-za folded and the Morita-za resumed its position, with the first performances in the spring of the year this print was issued.

One particularly unusual feature of this print is that the theaters all appear to be closed. Â Hiroshige himself had depicted Saruwaka-machi a number of times, but always with the theaters decked with huge colorful signs and fluttering banners and the streets packed with people. Â Here, however, the facades are unadorned and the crowds sparse. Â Given the season and the full moon, this must be the middle of the Eighth Month, when the theater was still waiting to resume performances on the ninth of the Ninth Month. Â During such interludes, the teahouses remained open, but business was slow.

The otherworldly qualities of this print apply not only to the place and the season, but to the hour as well. Â Even in the theater season, the crowds would have thinned by this late in the evening, for the performances were confined to the daylight hours. Â The details of the figures confirm that it is the end of the day. Â Men from the teahouses hold bright lanterns to guide their guests back to the gate. Â Â A palanquin waits beside one of the teahouses to the left, and among the figures are two who ply their trades at night, a fortune-teller clad in solid black and a blind masseur, head shorn, who is feeling his way with a cane.
Publisher
Uoei (Uo-ya Eikichi).
Keywords Click a term to view the records with the same keyword
This object has the following keywords:
1841-1868, Views of Edo, Japan
Portfolio List Click a portfolio name to view all the objects in that portfolio
This object is a member of the following portfolios: