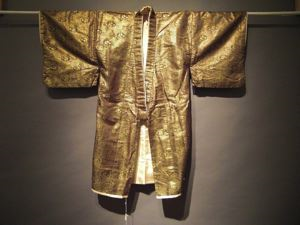 Commentary
Forms a kamishimo set, a formal outfit comprised of a kimono, hakama and kataginu. See also T673 and T674.

This three-part costume set / kamishimo is comprised of a short sleeve outer robe / kimono, a sleeveless inner robe / kataginu and trousers / hakama, that would be worn by an actor portraying a high-ranking samurai or member of the upper class. The outer robe is of green silk brocade, decorated with dragons and waves, while the inner robe and trousers are red silk brocade with patterned flowers in hexagons.

The robe is decorated with rondels depicting dragons and waves woven with dark green silk and gold wrapped threads. Such stylized dragons were said to live underwater and could ascend into the clouds to bring rain. Such a garment might be worn onstage by an auspicious character.


Medium
Dark green and gold silk brocade.
Object Description
A manâs kabuki theater costume. A full length robe with a background of dark green brocade and decorated with a pattern of dragon roundels on waves. The dragon roundels and waves are woven in gold wrapped paper/gilt and olive green embroidery. The lizard and cloud-like dragons have scales and horns, and are depicted as ârain dragonsâ which were believed to be the cause of rain. These Japanese stylized dragons were believed to live underwater, and their occasional transformation and ascension into heaven was believed to be a metaphor for advancement in the world. Three embroidered gold and black family crests (mon) can be found on the back of the robe under the collar and on the left and right shoulders. The mon depict a karabana flower. Karabana translates to âChinese flowerâ and was an imaginary flower originally imported from China. The inside of the robe is lined in off-white silk and has padding along the collar and sleeve edges.

Kennedy, Alan. Japanese Costume: History and Tradition.
Keywords Click a term to view the records with the same keyword
This object has the following keywords:
Robes, Textiles*
Portfolio List Click a portfolio name to view all the objects in that portfolio
This object is a member of the following portfolios:

Your current search criteria is: Portfolio is "Robes".