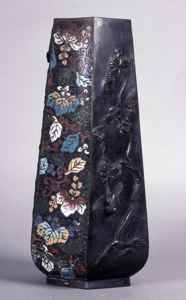 Commentary
This object was previously dated to c. 1820, but Gregory Irvine (Japanese CloisonnÃ©, 2006, pg.18) firmly states, âNo such things were manufactured as vases, plaques, censors or bowls having their surface covered with enamels applied either in the champlevÃ© or cloisonnÃ© styleâ¦prior to the year 1838 [when Kaji Tsunekichi reproduced a small cloisonnÃ© dish].â With that date in mind, the date of creation has been adjusted to c.1850.

Essay: This is a hexagonal-shaped bronze vase with alternating panels of champlevÃ© enamels and cast bronze relief. ChamplevÃ© is a technique in which vitreous enamel is filled into the etched or carves areas on the surface of an object. The relief panels depict birds in pine, bamboo, and plum branches, which represent the âThree Friends of Winter,â while the champlevÃ© panels are decorated with colorful vines and flowers. Different styles on the two adjacent planes show a clear contrast between a traditional Japanese theme (Three Friends of Winter) and the decorative technique of champlevÃ©. It is unusual for Japanese traditional crafts to use such strongly contrasting, even flashy colors, so the champlevÃ© panels may be a signal of new orientation toward foreign influences, especially the West. This vase successfully epitomizes the relationship between modernity and Japanese traditional culture during the early Meiji period.


Marks
No marks.
Medium
Multicolored enamels on bronze.
Object Description
Japanese hexagonal-shaped bronze vase alternating between panels of champlevÃ© enamels and cast bronze relief. The relief panels depict birds in pine, bamboo, and plum branches, completing the symbolic set known as the âThree Friends of Winter.â The champlevÃ© panels in between are decorated with paulownia vines on a dark blue ground, rows of karahana flowers on a turquoise blue ground, and scrolling flowers on a green ground. The champlevÃ© technique does not use thin wires to create cells for the enamel; instead, cells are carved out of the metal body and the enamel filled into the sunken cells.
Keywords Click a term to view the records with the same keyword
This object has the following keywords:
CloisonnÃ©, Cylindrical
Portfolio List Click a portfolio name to view all the objects in that portfolio
This object is a member of the following portfolios:

Your current search criteria is: Portfolio is "Japanese CloisonnÃ©".