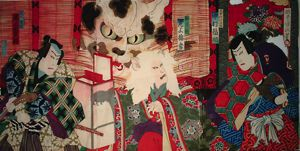 Commentary
This print portrays the scene âAt the Muryoji Temple in Okazaki'' from the kabuki play Traveling Alone to the Fifty-Three Stations, written by Tsuruya Nanboku IV (1755-1829). Nanboku was a popular playwright during Japanâs Edo period (1603-1868) when kabuki flourished. He became known for the dark content of his plays, which focused on the depraved parts of Edo (modern Tokyo) society, and often involved crime, murder, and degeneracy, along with instances of the supernatural. The scene depicted in this print is a prime example of the wickedness rife in his plays. Although this vignette is but a single fraction of this three-act play, the entire piece has been nicknamed âThe Monster Cat of Okazakiâ after this iconic scene.

In the play, a group of travelers arrive at a seemingly abandoned temple, but a mysterious old woman named Osan comes out and invites them to stay. Later that night, one of the travelers accidentally discovers Osan lapping up fish oil from a lamp, with the monstrous shadow of a cat demon cast upon the wall behind her. Osan notices the traveler and promptly murders her, then devours the body whole. The cat demon later gravely injures another traveler, who, with her dying breath, tells her swordsman companion of Osanâs true identity before being dragged into the curtains by a giant paw. In anger, the swordsman brandishes his weapon and attacks the cat spirit, which had stolen Osanâs identity. The swordsman miraculously overpowers the demon, who flees in a flash of flames as it disappears into the night.

Onoe KikugorÅ III (1784-1849), friends with the playwright Nanboku IV, is featured playing the role of Osan. We see the actor mid-transformation in the climax of the scene, with two cat ears sprouting from a disheveled white wig. Osan stands in shock next to a lamp, caught drinking the fish oil at midnight. Behind Osan is the old womanâs true form, a giant, bloodthirsty cat spirit, glowering and ready to pounce. Two determined swordsmen surround her on either side, ready to strike. Designed by Utagawa Kunisada III, the abundance of red emphasizes the chaos of the scene, framing both forms of Osan and the two swordsmen.


Marks
Seals: left panel - upper left (3), middle panel - upper right (2), right panel - upper left (2) and upper right (1).
Medium
Colored ink woodblock on off-white paper.
Object Description
"During the Edo period (1600-1868), people believed that a cat (neko) could disguise itself as a human, usually as a woman. This scene portrays the actor Onoe Baiko (1831-1885) wearing an enormous wig to indicate his identity as a witch-cat, that also looms outside the dwellings of the samurai in the image. The artist Kunimasa was also known as Kunisada III, and continued the actor print style of the Utagawa School."
(EN, student in 2010 seminar ARHI154 Japanese Prints)
Keywords Click a term to view the records with the same keyword
This object has the following keywords:
1841-1868, Actors and Actresses, Kabuki, Mythological Creatures
Portfolio List Click a portfolio name to view all the objects in that portfolio
This object is a member of the following portfolios: