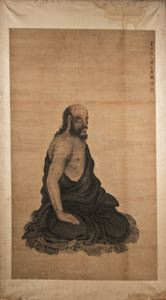 Commentary
Old number "L1136/33" is written on the backing paper in pencil. Listed in the Munthe inventory (p. 33) as "Portrait of a Lohan of comparitively modern style, perhaps even betraying European influence. 18th century or even more recent."
Marks
Probably early 20th century Lingnan school painting. It is signed in the upper right, but the signature is unknown. It may be a monk's name.

Very unusual painting of what appears to be Bodhidharma (founder of Chan Buddhism in China). Slight western influencesâmodeling of three-dimensional form in particularâare what prompted my suggestion of the Lingnan School, a Canton-based group of artists active early in the 20th century who combined Western techniques learned from Japan with Chinese. Signature is odd.

A signature written in black ink and two square red ink seals are stamped in the upper right of the image.


Medium
Black, grey, and brown ink washes brushed upon paper. Off-white silk brocade border.
Object Description
Mounted vertical scroll of a seated man wearing a robe, which exposes his right arm and the right side of his chest. The man faces the viewer with a 3/4 profile view. There is no background.
Keywords Click a term to view the records with the same keyword
This object has the following keywords:
Buddhism, Paintings
Portfolio List Click a portfolio name to view all the objects in that portfolio
This object is a member of the following portfolios:

Your current search criteria is: Portfolio is "Buddhism".