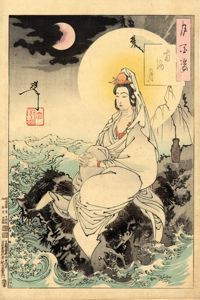 Credit Line: Purchased with funds from the Aoki Endowment for Japanese Arts and Cultures
Accession Number: 2003.1.34

Alternate Title: One Hundred Aspects of the Moon: No. 68, Moon of the Southern Sea

"Of the many forms of Kannon, one called Nankai Kannon, "Southern Sea Kannon," was worshipped by fishermen and sailors. The representation in this design was also called Shui yue Guanyin, "Water-moon Kannon;"...Artists of the academic Kano school often used the subject - in the design here, the minimal color, abstract treatment of the rocks, and the calligraphic folds of the robes all call to mind a Kano ink painting.

Kannon's calm face with in Indianised features contrasts with the rough seas and angry black clouds that cross the moon. The halo of the goddess is a dominant feature. Yoshitoshi and his craftsmen have successfully captured its translucence, showing the characters of the cartouche appearing through the halo. This brings the goddess closer to the viewer and makes her sanctity almost tangible."


Publisher
Akiyama Buemon.
Keywords Click a term to view the records with the same keyword
This object has the following keywords:
1886-1890, Buddhism
Additional Images Click an image to view a larger version

Your current search criteria is: Portfolio is "Buddhism".