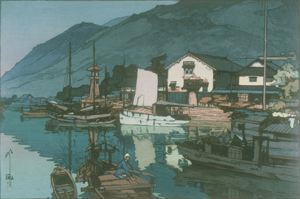 Commentary
Tomonoura is a charming fishing town in modern Hiroshima Prefecture and looks out over the Seto Inland Sea. It has long been a prosperous port and is known for its unique circular harbor that is still preserved even though the port facilities have been modernized. Yoshida Hiroshi, who had mastered Western-style painting before he began designing woodblock prints around 1920, became well known for his landscape prints of Japan â as well as scenes from his travels to India, Pakistan, Afghanistan and Singapore. His tranquil scene of Tomonoura features several buildings and boats rendered in multiple layers of color to create the effect of a watercolor painting.


Marks
Signed Hiroshi Yoshida in pencil in the lower margin, and printed in Japanese, with a seal. Dated left margin (1930).
Medium
Colored ink on paper; woodblock print; oban yoko-e.
Object Description
Twentieth century Japanese color woodblock print of fishing boats in a village harbor.
Keywords Click a term to view the records with the same keyword
This object has the following keywords:
Coastal, Showa Period
Portfolio List Click a portfolio name to view all the objects in that portfolio
This object is a member of the following portfolios:

Your current search criteria is: Portfolio is "Showa Period (1926-1989)" and [Objects]Display Artist is "Hiroshi Yoshida".