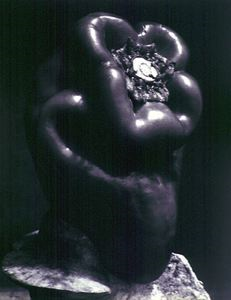 Bibliography
"American Photography: Past into Present", Seattle Art Museum (exhibition catalog), 1976.
Commentary
Among Edward Westonâs iconic images are his still-life peppers, which transform a humble vegetable into something monumental. Weston took up the pepper theme in 1927 and continued it throughout the late 1920s. Using an Ansco 8 x 10 commercial view camera with a Zeiss lens, Weston shot close-up views of peppers, which made their curving forms look like sculptures, as seen in this 1929 Pepper. Weston places this pepper on a stone pedestal, which enhances it sculptural character.

While Weston dramatically lit this pepper, in other still-life photographs he sought a more subtle effect. From August 2nd through 6th, 1930, Weston also created more than 30 negatives of peppers for a series of silver gelatin prints, all approximately 9 Â½ x 7 Â½ in. Weston looked for ways to instill an enveloping light; and he found it in another mundane object, a tin funnel. Placing the pepper inside the funnel, he reflected light off its interior walls, softly revealing the pepperâs curving contours.

For Weston, the pepper form carried an emotional resonance. Later, in his journal Daybooks, Weston wrote: âI have done perhaps fifty negatives of pepper: because of the endless variety in form manifestations, because of their extraordinary surface texture[s], because of the power, the force suggested in their amazing convolutions. A box of peppers at the corner grocery holds implications to stir me emotionally more than almost any other edible form, for the run the gamut of natural forms, in experimental surprises.â

Weston wanted to produce abstract photography, a difficult task given that cameras reproduce the world they see. Pepper exemplifies this aim. Through a dark, close-up shot of the pepper, the photograph strips this organic object of its original meanings. It does not look edible and, appears only vaguely plant-like. It has instead become a series of sinuous curves, showing off the cameraâs skill at capturing light and shadow.


Exhibitions
"American Photography, 1920-1945", Lang Gallery, 11/6/88-12/18/88
Marks
Inscribed "EW 7/50" in mount, below print, left in pencil. "Edward Weston 1929" below print, right, in pencil.
Medium
Black and white photograph, mounted onto off-white card-stock.
Object Description
Early twentieth century black and white photographic print of a bell pepper.
Keywords Click a term to view the records with the same keyword
This object has the following keywords:
Fruit and Vegetables, Gelatin silver print
Portfolio List Click a portfolio name to view all the objects in that portfolio
This object is a member of the following portfolios:

Your current search criteria is: Portfolio is "Plants" and [Objects]Object Type is "Photography".