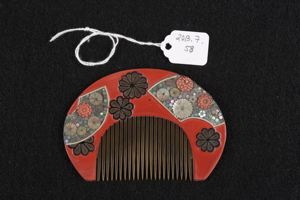 Commentary
This dramatic comb was made in the early 20th century. It was formed with a mold out of plastic (probably Bakelite) and then painted a vibrant red in imitation of lacquer, with details in mother-of-pearl. The larger chrysanthemums were formed in the mold, while the smaller mother-of-pearl mums inside the fan-shaped sections were probably affixed with an adhesive. Although plastic is a cheap, ubiquitous material today, in the 1920s and 1930s it was still an exciting and modern material that was hard to come by, and plastic jewelry and other ornaments were very popular around that time. It would have been worn during the autumn months for special occasions.

These Japanese hair ornaments were collected by the late Angelyn Kelley Riffenburgh over decades. Angelynâs husband, Dr. Ralph Riffenburgh, presented the combs in her honor to the Scripps College collections in 2012. Most of these hair ornaments, or kanzashi, are made of bamboo or lightweight woods that have been lacquered; they date from the 18th century well into the 20th, when elaborate hairstyles included decorative combs (kushi) and hairpins (kogai). Matched sets of ornaments featured seasonal images, landscape scenes, as well as historical or fictional references. The combination of pine, bamboo (nanten), and plum blossom (shochikubai) designs were popular at New Yearâs time. Cherry blossom patterns were worn in the spring, and chrysanthemums in the autumn. Some kanzashi were made with tortoiseshell, mother of pearl, bone, or precious metals. Hairpins with a ball ornament, or tama, were also color coordinated to the seasons, with the cool colors green and blue worn during the summer months and the warm colors red, orange, and gold used during the winter.

--Bruce Coats, Professor of Art History and the Humanities


Marks
None.
Medium
The comb is made of painted plastic with inlaid mother of pearl.
Object Description
The comb's design features fans and mums. The raised flowers were not carved or added after the main body of the piece was made; they were included in the mold. The comb is a tenmaru-kata shape.
Keywords Click a term to view the records with the same keyword
This object has the following keywords:
Decorative Objects, Fans, Flowers, Japanese Art, Japanese Customs, Japanese History
Portfolio List Click a portfolio name to view all the objects in that portfolio
This object is a member of the following portfolios:

Your current search criteria is: Portfolio is "Plants" and [Objects]Object Type is "Hair Ornamentation".