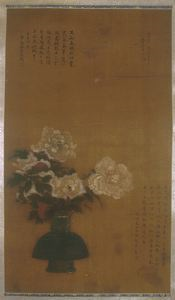 Commentary
Nian Xiyao was a native of Guangning in Liaoning Province and was a doctor, mathematician, and vice minister in the Ministry of Works. He served as the director of the imperial kilns at Jingdezhen under the Yongzheng emperor. He also published a treatise on Western perpective that has been studied by several scholars, as well as an illustrated manual for porcelain decoration. Ji Zengyun (1670-1740), a native of Wuxi in Jiangsu Province, received the jinshi degree in 1706. This inscription was written the year before he was appointed Grand Secretary in the Ministry of Rites. The third colophon write has not yet been identified, but he is likely another high ranking official of the Qing dynasty. The painting is finely executed in the tradition first associated with the10th century court, but apart from its artistic quality, this is the only known painting attribution to Nian, who is recorded as being trained in that art. This is a very important historical artifact due to the fame of the individuals associated with it.


Marks
Three inscriptions with seals. Artistâs signature and date in upper right. âIn the spring of the renzi year of the Yongzheng era, I imitated the brush idea of Huang Quan (10th c.). Nian Xiyao of Guangning.â Inscription in the upper left in 1732 by Ji Zengyun. Inscription in the lower right. 1733.

Text in the upper left and the lower right. Signature and seal in the upper right.
Medium
Colored ink brushed onto paper.
Object Description
Ching period Chinese ink painting of flowers in a vase; with text.
Keywords Click a term to view the records with the same keyword
This object has the following keywords:
Flowers, Paintings
Portfolio List Click a portfolio name to view all the objects in that portfolio
This object is a member of the following portfolios:

Your current search criteria is: Portfolio is "Plants" and [Objects]Object Type is "Drawing".