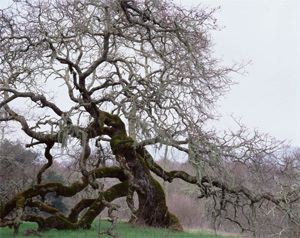 Commentary
I began the Searching for California Hang Trees series in 2002. The series grew out of my initial research into Latino portraiture, but quickly evolved into something very different after two of the images I uncovered were discovered to be of Latinos condemned to be hanged. This led me to look more closely into the question of capital punishment, vigilantism, and cases of lynching in the West, all of which suggested that race was more of a factor than many had every realized. My own research documented that, in California, an unexpectedly large percentage of lynchings were perpetrated against Latinos, Native Americans, and Asian Americans. When combined with African American lynchings, these cases demonstrated that race was undeniably a contributing factor. My own list included more than 350 cases occurring between 1850 and 1935, and I found that Latinos made up more than forty percent of the total cases, a percentage that was greater than any other racial or ethnic group, at a time when Latinos were estimated to have been between five and ten percent of the stateâs total population. While I was still working on the book, Lynching in the West: 1850-1935 (Duke, 2006), I began to wonder if the lynching trees were still there and, if so, what the sites looked like today. Were they marked in any way? Had anyone had recorded this history? One day, when I was reading microfilm in the basement of the State Archive, I realized I had to get out of the library and go see if I could find the site. This began an ongoing journey to look for, and visit, all of the sites I had uncovered. Obviously, many of the exact trees were gone, converted into parking lots and shopping malls, but the questions underlying the series remained. Ken Gonzales-Day Professor of Art
Medium
It is a Lightjet print mounted on aluminum with a UV laminate.
Keywords Click a term to view the records with the same keyword
This object has the following keywords:
Color print, Digital print, Rural, Trees
Portfolio List Click a portfolio name to view all the objects in that portfolio
This object is a member of the following portfolios:

Your current search criteria is: Portfolio is "Plants" and [Objects]Display Artist is "Ken Gonzales-Day".