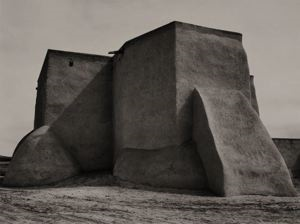 Commentary
In 1941, Ansel Adams was contracted by the Department of the Interior to create a photomural of natural landscapes for its building in Washington, DC. Adams had already shot a great deal of photographs when the project came to an end due to the onset of World War II. This photograph belongs to a series that Adams captured of Old Faithful Geyser during one of his visits to Yellowstone National Park. The plume of water consumes most of the frame as it erupts from the earth. The white water dwarfs the mountains in the background while reaching into the dark sky. The contrast between the water and background draws the viewerâs eye into the sulfuric mass and holds it there.

Ansel Adams once said that Taos New Mexicoâs San Francisco de Asis Mission Church âseems an outcropping of the earth rather than merely an object constructed upon it.1 It is this quality of the churchâits deep-rooted monumental presenceâthat Adams documents in this photo.

When the Spanish settled Ranchos de Taos in the eighteenth century, Taos was already an ancient community, inhabited by Pueblo Indians for thousands of years. Built in 1815, the San Francisco de Asis Mission Church is remarkable for the way that it blends Spanish architectural styles with native, adobe building. In this picture, Adams captures the rear view of the building, less recognizable as a church, and celebrates the sculptural qualities of buttressed adobe. Indeed, Adamsâs black-and-white photography beautifully accentuates the play of light and shadow across the churchâs organic adobe surfaces. Other artists, such as Georgia OâKeefe and Paul Strand, also painted and photographed this rear view of the church.
This image was included in Adamsâs first book, Taos Pueblo, the success of which, even in the midst of the Great Depression, inspired Adams to abandon his dream of becoming a concert pianist and devote his life to photography.2

New Mexicoâs unique adobe structures fascinated Adams, who was largely unrecognized for his architectural photography. His interest is understandable: adobe has a timeless air to it, and its earthy texture makes it seem like a natural extension of the landscape. Adamsâs residence in New Mexico was an early breakthrough for his artistic practice. There he met American painter Georgia OâKeeffe, and began to experiment with Alfred Stieglitzâs ideas on modernist photography, exemplified here by the abstract form of the church and the solid field of gray that has replaced the sky. The influence of his New Mexico compatriot is also shown in his choice of subject: OâKeeffe painted her own rendition of this church the same year Adams shot this image.


Marks
This work bears the signature of the artist in pencil at the lower right, directly beneath the photo.
Keywords Click a term to view the records with the same keyword
This object has the following keywords:
Landscapes, Nature, Photography, Trees
Portfolio List Click a portfolio name to view all the objects in that portfolio
This object is a member of the following portfolios:

Your current search criteria is: Portfolio is "Plants" and [Objects]Display Artist is "Ansel Adams".