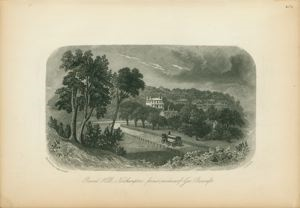 Object Description
A coach travels down a country lane toward the buildings of Round Hill School in Northampton, Massachusetts. Round Hill School was founded by George Bancroft, United States statesman, and Joseph Cogswell in 1823. Though the school closed in 1834, it was one of the first efforts to elevate secondary education in the United States. Bancroft would go on to serve as Secretary of the Navy and establish the United States Naval Academy at Annapolis.

Sketched from a daguerrotype and engraved by J. Rolph, for the book Homes of American Authors, published in 1853 by G.P. Putnam & Co., New York.

From Homes of American Authors:
"During [Bancroft's] long residence in Europe he had matured his projects to raise the standard of education in America, and in the following year he, witht Mr. Cogswell, now Librarian of the Astor Library, commenced the famous Round Hill School at Northampton. Three brothers Shepard...had built three neighboring houses upon this spot. Gradually they had all passed into the hands on one of them, who was willing to sell them, and they became the seat of the school. The estate comprised about fifty acres."


Keywords Click a term to view the records with the same keyword
This object has the following keywords:
Academic, Rural
Portfolio List Click a portfolio name to view all the objects in that portfolio
This object is a member of the following portfolios:

Your current search criteria is: Portfolio is "Rural Landscapes" and [Objects]Century is "19th c".