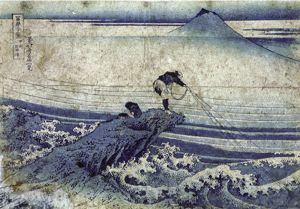 Commentary
Katsushika Hokusai (1760-1849) is considered to be one of the masters of woodblock printing. Many of his works, chief among them, "The Great Wave off Kanagawa," are still held in high esteem today. He was also one of the most prolific woodblock artists, with a career that spanned over 70 years and included thousands of prints in a wide variety of genres.

This particular print, a view of the coast near the town of Kajikazawa, is one of the most graceful prints in his Fuji series. The print is rendered solely in shades of Prussian Blue, a vibrant pigment imported from Europe which Hokusai popularized in the 1830s. The gently sloping sides of Fuji are mirrored by the lines formed by the promontory, the fishermen, and their nets. This harmonious composition, together with the monochromatic color scene, creates a sense of serenity and awe in the face of nature's majesty.

In the early 19th century, leisure travel and sightseeing became increasingly feasible and affordable for Japanese townspeople. This led to a burgeoning desire for images of new locales and horizons amongst print consumers, causing landscapes such as this one to become increasingly popular.

Essay on the Work:
Many in Japan and the West have considered Hokusai to be Japanâs greatest artist. While much of this exaggerated sentiment comes from the sheer diversity and size of his body of work, Hokusaiâs breadth and range should still remain notable. Passionate about painting, he worked obsessively for seventy years of his life, producing over thirty thousand print designs. Moving residence approximately ninety times in Edo, Hokusai was an eccentric character and very much his own artist. Most likely, he worked for multiple publishers to maintain a livelihood while experimenting with his art. In 1830, Hokusai published the commissioned series that brought him to the peak of his career, Thirty-six Views of Mt. Fuji. Given the emergence of Fuji cults and the trend of travel at the time, this series, which starred the mountain and the surrounding nature in their might, was timed perfectly. Locations portrayed in these prints promoted travel destinations, places where city people could immerse themselves into the natural environment and worship different deities. While its urbanization seemed to suggest the opposite, Japanese culture has always had a certain connection to nature that Hokusai drew upon in his nature and landscape prints. Elements and aspects of nature were considered to have spiritual lives of their own and in painting, deserved portrayal as subject matter rather than as merely dÃ©cor. Like other prints of the Fuji series, âKajikazawa, Kai Provinceâ captured the spirit of the depicted locationâs environment. âKajikazawa, Kai Provinceâ is considered one of Hokusaiâs most evocative and successful designs in the series. Much like his iconic âThe Great Wave off Kanagawaâ, this print captures the majestic might of water, emphasized by the Prussian blue color scheme. With Mt. Fuji peeking from a distance by means of Western vanishing point perspective and rising from a bare outline of mist that blends into the sky, a fisherman casts his line into a river. While the waters appear fierce and unstable with crests like sharp claws in Hokusaiâs fascination with the grotesque, the waters provide the fisherman with a livelihood and symbolically provide humanity with nourishment. Since the man shows determination to make a bountiful catch with his body arched to hold his lines and his feet grabbing onto the craggy rock, the print communicates manâs resilience in spite of his fragility. Even the fishermanâs young son shows eagerness to match up to his father as he sits, handling the fish basket. Compositionally, the piece is simple, yet powerful. The print is organized by repetition of similar form. For instance, the boyâs head, his fatherâs back, the prow-shaped rock that they settle upon, and the net lines almost exactly mirror the mountainâs outline. Even the waves themselves repeat Fujiâs triangle shape. Amidst this printâs ode to water and Fuji, the print also honors the strife of the manâs livelihood as well as his personal attribute of resilience, which fits Hokusaiâs fondness of featuring laborers in his work.
Isabella Ramos, Scripps College 2017


Marks
Signed: Zen Hokusai Iitsu hitsu. Censorship seal: aratame.
Medium
Nishiki-e, horizontal oban; colored ink on paper.
Object Description
This print is one of Hokusai's most successful and evocative designs in the Fuji series. In its simple composition, with only a few elements, Hokusai presents the close interaction between natural forces and fragile, yet durable men. The pounding waves and wind-driven rain seem mercilessly cruel to humans, but at the same time, these forces also provide man with a way of life when he is determined to survive.

Fuji rises near the distance, revealing its summit through thick fog. Standing in the river on a rugged rock washed by turbulent waves, a fisherman cast his net lines. His determination to make a good catch is expressed in his posture - foot firmly gripping the rock and body bent to hold the lines. His little son, sitting on the rock below him, tends the fish basket. They exchange no word, but they are perfectly united in their dangerous endeavor.

As with most of Hokusai's great designs, this composition is organized by a simple geometric principle: repetition of similar forms in varied locations. The left slope of Fuji is mirrored in the line created by the form of the large rock, the child's head, and bending body of the fisherman. The right slope of the mountain is repeated by the net lines. The waves repeat the triangular shape of the mountain.

This print shows a typical basic color scheme of blue. The key-block was printed in blue.

(Ref. "Hokusai and Hiroshige," p.69.)
Publisher
Eijudo (Nishimuna-ya Yohachi).
Keywords Click a term to view the records with the same keyword
This object has the following keywords:
1821-1840, Mountains
Portfolio List Click a portfolio name to view all the objects in that portfolio
This object is a member of the following portfolios:

Your current search criteria is: Portfolio is "Mountains".